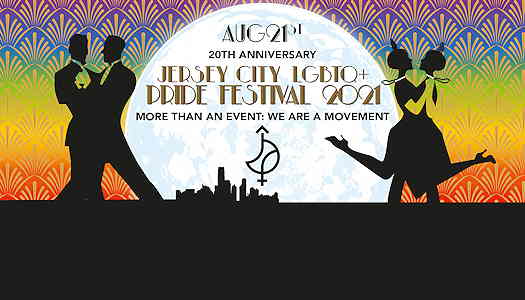 We’re roaring back like the 1920’s. That’s right…the Jersey City LGBTQ+ Pride Festival is returning to the Newark Ave. Pedestrian Plaza this year to celebrate our 20th Anniversary!

There will be a month-long celebration throughout Jersey City leading up to our Pride Festival celebration on August 21st.

The Festival with be on the Grove Street PATH Plaza and Newark Ave. between Grove St. & Erie St. A smaller footprint than previous years, but expect the usual over the top fun time. Returning will be the Pride March up Newark Ave. at 1PM to kick off the event.

Expect lots of entertainment, dancing and many Instagramable moments to share with your friends and family. The festival will be followed by an after-party at Six26.

We encourage you to put on your best Pride gear and help commemorate this landmark year.