Many are quick to dismiss some of the “children” in the community because they’re usually more interested in Instagram followers than following the history of our community. There could be nothing further from the truth. Asbury Park’s own E.LicksHer is rapidly proving that is not right. This pint sized drag dynamo is just starting out on the drag scene and has already snagged the Fresh Face title. She specializes in showcasing brand new drag talent. I caught up with E.LicksHer and we chatted about her “beyond” unique talents, and her insightful views on drag and the community. Throughout our conversation, E.LicksHer is quick to show that her knowledge of our LGBT history is truly helping aim her in terms of where she wants to go.

For those that have never seen E. LicksHer on stage, how would you describe your performance style and “drag” as a whole?

E.LicksHer: Truthfully this is such a hard question for me to answer, because I’m still building the foundation of my drag. Although there are so many directions my drag could go, i’m currently focusing on creating this melting pot of circus, magic, and drag. It’s definitely going to be an eclectic and avant-garde, yet charismatic blend of Tim Burton, burlesque, and quirkiness.

You are known to perform some uber unique numbers and are truly one of a kind for the drag scene. How do you choose your material? Any favorites that really stand out?

ELH: Picking the material is the easy part! I listen to a song I like, and if my brain starts naturally choreographing something, then I stick to it. Then I sketch out costume ideas and teach my body the choreo. I approach all my numbers like this. And it almost seems like second nature.

As for my favorite number, it would have to be my Halloween number. I found a “rap” song that was completely in gibberish. The artist’s voice was so raspy and deep that the song had a creepy element to it. At first, I had no idea what I wanted to do with it but I knew I needed to do a number to it. It wasn’t until I was learning the “lyrics” in a car jam session that I had an epiphany to perform as Regan MacNeil from “The Exorcist.” Without a second thought I bought: a fugly powder blue moo moo, pink slippers, and paint stirring sticks to make a crucifix. I won’t go into detail about the number, but if you’ve seen the movie it’s rightful to assume what the cross is for.

How did E.LicksHer get started in the drag scene?

How did E. LicksHer get her start in the New Jersey drag scene?

ELH: At Georgie’s! I was attending a Drag 101 class at Project R.E.A.L. in Asbury Park and they wanted to see me lip sync. At the time all I had was a hoop skirt, a corset, a straight jacket, and Postmodern Jukebox’s cover of Ozzy Osborne’s “Crazy Train.” And thought I could pull something together. I already knew the lyrics so I choreographed an escape to the song and hoped it wasn’t too weird.

After I performed it Kingsley Spectrum, an instructor at R.E.A.L., basically demanded I perform it at the Talent Show Georgie’s was hosting the following day. Without a second thought I did it. And I blacked out during my performance. Let me be clear: I wasn’t drunk. The last thing I remember telling myself was “do it like you practiced.” The next thing I knew I was in the dressing room out of the straight jacket. It was so surreal because I won 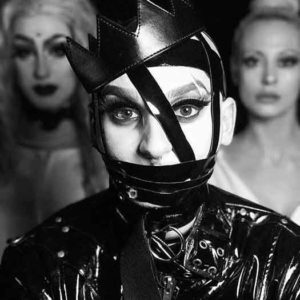 the cash prize that night, but I didn’t remember doing anything.

It’s so hard to stand out in New Jersey scene and in drag; how have you carved out your own niche?

ELH: I always knew I was weird. When i first stepped out i didn’t know what to do so i went ham with the makeup. I used body paints and special effects makeup to create this avant-garde, gothic look. Nothing ladylike, but i feel more comfortable that way. As I continued doing drag I’d get back-handed comments like “this is a great look but you have chest hair,” or, “I wish you didn’t rot your teeth.” Hell, even out of drag I get shit for being bald. So now, my direction for drag is focusing on body positivity with a Frankenstein complex. I don’t need the whitest teeth, smoothest skin, or voluminous hair to know I’m perfect with what I got. It’s like taking a million pictures to get a good selfie you’ll probably delete later out of insecurity. Meanwhile, you can take one really funny photo — and have a great laugh about it.

What are some of your career highlights so far? The Fresh Face competition I am sure is an accomplishment!

ELH: Absolutely! That was a six-month long competition had paid off when the crown was put on my head. Before Fresh Face, I had zero knowledge about drag. But I did have performance and makeup skills under my belt. I used to do magic shows, juggling, and stilt walking at a theme park, as well as working at a makeup counter in the mall. The highlights would have to be doing stilts in The Macy’s Thanksgiving Day Parade every year and occasionally doing back-up vocals for Fredi Walker-Browne when she has a gig and needs her face painted up.

What is left that you want to achieve? Any aspirations to be on RuPaul’s Drag Race perhaps?

ELH: What isn’t left? My drag career isn’t even a year old, and I’m loving all of it so far. I know 2019 will be a quiet year for me because I want to grow and season as an artist. I will be performing, but pageants/competition are on the back burner until 2020. Television wise I’m hoping to be on Dragula before RPDR. But hey, I wouldn’t mind having both of those crowns. I think crowns look really good on me.

Speaking of Drag Race several NYC girls have won. How do you think the show as a whole has been for the drag community?

ELH: “One-sided” to say the least. Don’t get me wrong, I love Drag Race. But drag has expanded to this broad spectrum that it’s boring to see the show still confined to an out-dated definition of drag.

E.LicksHer drops some drag names of her favorites

You are part of a great group of ladies who are bringing a fresh and new perspective to drag in New Jersey. Who are some of your favorite sisters to perform with and why?

ELH: I mean other than literally everyone in Asbury Park; I’d have to specifically say Haus Real with Rhedd Rhumm, Lady Celestina, Kingsley Spectrum and my Fresh Face sisters: Morrigan Von Haunt, Magnifeast, and Luna Bin/Und Ed. These are some of the craziest people to perform with. You really don’t know what to expect from them, but you are guaranteed a great show.

The gay community has had a very trying year, and politically things are very dark. What do you think are the biggest issues facing our community and what do you see as your part in helping to address them?

ELH: I could ramble on-and-on about President 45, and all his dim witted minions. However, everything I say wouldn’t be news. It would start arguments. And no one would listen, and then we’d talk in circles until the name calling commenced. So I’m not going to comment on that. If you want to see that… head over to my Facebook page and see if I get banned again.

Truthfully, I’d rather talk about discrimination happening in our own community. I’m appalled to hear about fellow LGBTQIA+ friends and allies say they “don’t get the whole trans thing,” “there’s only two genders,” “you’re not bi; you’re gay or straight.” God it all sounds so stupid. Other people live on this earth with cultures far different than your own. We all need to know that the universe holds so much more than your personal philosophies could even begin to understand.

What does “pride” mean to you?

ELH: It goes without saying that pride is about celebrating who you are. Personally, I like to think about the people that fought for our right to celebrate. If it wasn’t for people like Bayard Rustin, Barbara Gittings, and Marsha Johnson we wouldn’t have as much progress in our community. People ranging from all ages, genders, and ethnicities are realizing there’s nothing wrong with the emotions they want to express. I feel that’s inarguably because of a community where you can pick-n-choose a family that wants to unconditionally love you no matter what.

Where can people see you perform?!

ELH: You can catch me at Georgie’s and Paradise in Asbury Pasrk. I’ll be out and performing more often now that I know how to use a sewing machine. Other than performing, you can see me serving shots every Bulge night (The second Friday of every month) at Georgie’s and every Drag 101 class at Project R.E.A.L. (The fourth Wednesday of every month). I’m always floating around and constantly get pop-up gigs so to stay updated follow me on social media @E.LicksHer on Instagram and Facebook.

Ring in the Holidays with Paige Turner