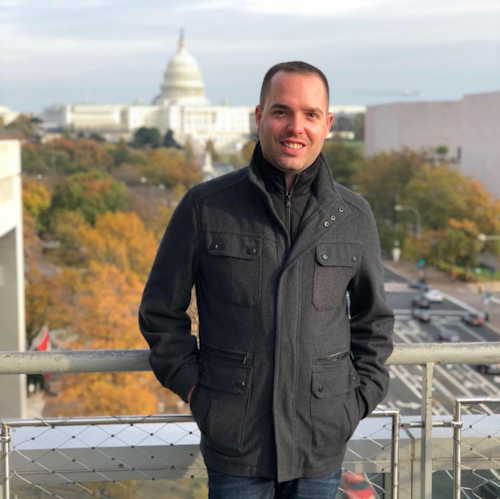 In the sometimes crowded circle of DJs in New York City, (and adjacent) Mikey Mo is definitely in a class of his own. While other DJ’s were able to learn the craft behind the decks by matching the beats and mixing songs, Mikey Mo had a severe hearing challenge that has made his rise through the ranks of DJ’ing much more amazing. From Paradise, to The Ritz, to The Monster, and Ziegfeld’s Secrets DC, Mikey has tackled a large amount of the East Coast hotspots. He is poised to take on some more nationwide gigs, and who knows, next stop—the world!

I sat down with Mikey for an intimate talk on his love for DJ’ing, working through the adversity he faces, and why staying humble is crucial to success.

Right off the bat Mikey, how did you get into the world of DJ’ing?

Mikey Mo: I’ve always been super passionate about music, it doesn’t even matter what kind. If it sounds good to me, then I like it. It all started when I would stand by the DJ booth wherever I was out in New York City and just watched the DJ. I learn best by just observing others, so it just sort of rubbed off on me. Then one day, I decided to get a basic laptop controller and software to start playing around. I asked lots of people lots of questions and paid close attention to what the DJ was doing and playing when I was out and about.

For those that have never heard your sound, how would you describe it?

MM: I don’t have a set, specific sound. I’m really a people pleaser. I try to play what I think the crowd will be into, while also throwing in interesting and unexpected tracks here and there. I love to play anything that has a strong beat, lots of energy and is usually along the lines of Pop/Top 40 so that it is at least somewhat familiar, yet just a little bit different than what you hear on the radio.

It is hard to climb the ladder and become one of the premier DJ’s in New York City; what do you think the secret is to your success?

MM: I could sit here and tell you that it’s based on talent alone, but that would not be entirely true. Like most industries, especially here in New York City, it is about who you know as well. Thankfully, I’ve had massive support starting at literally day one from my dear friend Steve Sidewalk who’s been a legendary DJ nationwide for 20 plus years now. He’s taught me everything he knows about the business, and has been a fabulous mentor.

It’s also important to put yourself out there. Go to the venues, get to know the staff, support your colleagues. We’re all family here, and we need to be there for each other. I keep a positive outlook, avoid the negativity and stay humble!

You are very forthcoming and open about your hearing deficiency with your DJ’ing. Tell me about that.

MM: I’ve been severe/profoundly deaf since birth. I can’t hear at all in one ear, and [I am] mostly deaf in the other. However, thanks to my incredible parents and some amazing teachers that have worked with me since I was nine months old, I’ve been able to maximize what little hearing I have to the point where people literally don’t even realize how deaf I actually am. I do also know ASL pretty well, which helps to bridge the gap between my deaf world and my hearing world.

Has it been a challenge to prove yourself as a DJ even more with your hearing disability?

MM: I think it definitely has. While most people won’t directly come out and say it, I do think that there is some hesitation at first about having this deaf guy be the DJ. But, given the chance, once I get in the booth those concerns are usually gone by the end of the night. With time though, I think my expanding resume and my up and coming reputation will speak more for me than my disability.

What have been some of your career highlights thus far?

MM: Just working at some of these legendary venues has been a highlight for me. Having the opportunity to DJ in seven states in places like Splash, The Monster, The Ritz, Paradise in Asbury Park, Cobalt in DC, The Palace in Miami, and Rich’s in San Diego has been nothing but a dream for me.

How do you choose the projects you work on? Any favorite mixes of yours that stand out? Anything super fun coming that you can talk about?

MM: I’ve been slacking big time on making some new podcasts, so maybe it’s about time I posted a new one (laughs). Stay tuned to my SoundCloud at @MikeyMoNYC and who knows what will pop up?

What’s next for Mikey Mo?

MM: I’d like to travel more as a DJ starting with new states and cities across the country, but DJi’ng in other countries is definitely a goal.

What would the Mikey Mo of today tell the Mikey Mo who was just starting out as a DJ? Did you ever believe you would be able to accomplish all that you have?

MM: Honestly, I never thought I’d have the guts to stand up in front of a crowd of hundreds of people to play music for them. I’m lucky that I have the support system that allows me to pursue something that I’m so passionate about. If anything, I’d tell myself to be more patient and let things happen in time. There may be people climbing the ladder faster than you, but there are also those that are struggling below you. Be appreciative of what you have going for you. Listen to those who have more experience than you, and be a role model for those who are up and coming as well.