More than five decades ago, our country wrestled with the issue of whether businesses open to the public should be open to everyone on the same terms, regardless of their race. Among other reasons offered at the time for perpetuating the wholesale exclusion of African-Americans from restaurants, movie theaters and hotels was the importance of sincerely held religious views: the conviction, by some, that their religious faith prohibited mixing of the races. In the Civil Rights Act of 1964, Congress resolved that debate in favor of rectifying “the deprivation of personal dignity that surely accompanies denials of equal access to public establishments.”

On that principle, there ought to be no question that Colorado’s law allowing Charlie Craig and David Mullins to buy a wedding cake from any bakery they choose — notwithstanding that they are gay — should trump claims by a bakery that providing the cake would violate the owner’s religious beliefs. Yet that is the question the Supreme Court will take up this term in Masterpiece Cakeshop v. Colorado Civil Rights Commission.

Freedom of religion is one of our most fundamental rights in America. That is why it is protected in the First Amendment to the Constitution. But religious liberty is not a talisman that confers absolute immunity from any personal constraints at all: At times, the free exercise of religion yields to other foundational values, including freedom from harm and from discrimination.

The balance between these foundational values is illustrated in Newman v. Piggie Park Enterprises, the Supreme Court’s 1968 decision in a challenge to a South Carolina barbecue chain’s policy of denying service to African-Americans. Piggie Park — famous largely for the Supreme Court’s powerful statement of the need for private attorneys general to vindicate civil rights — is no less instructive for the lower court’s treatment of the segregationist restaurant owner’s religious-liberty justification for his policy of refusing to serve black customers: “The free exercise of one’s beliefs,” the trial court explained, “as distinguished from the absolute right to a belief, is subject to regulation when religious acts require accommodation to a society. Undoubtedly, [the restaurant owner] has a constitutional right to espouse the religious beliefs of his own choosing; however, he does not have the absolute right to exercise and practice such beliefs in utter disregard of the clear constitutional rights of other citizens.” 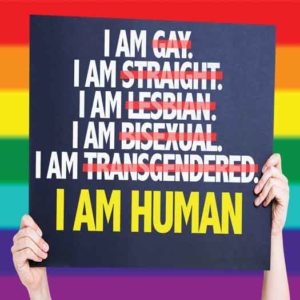 The district court’s conclusion in Piggie Park was grounded on the recognition of equal personal dignity for all people in America, regardless of who they are. As Justice Arthur Goldberg pointed out in his concurring opinion in Heart of Atlanta Motel v. United States (upholding Title II of the Civil Rights Act of 1964 as a lawful exercise of Congress’ enforcement power under the commerce clause), the primary purpose of banning discrimination in public places is “the vindication of human dignity and not mere economics.” Quoting a Senate committee report on the Civil Rights Act of 1964, Goldberg explained that “[d]iscrimination is not simply dollars and cents, hamburgers and movies; it is the humiliation, frustration, and embarrassment that a person must surely feel when he is told that he is unacceptable as a member of the public because of his race or color.”

No less than racial minorities, LGBT individuals are our friends, neighbors, family members and co-workers. They work hard, serve in the military and pay taxes. When it comes to being served by a business otherwise open to the public, longstanding Colorado laws say gay and transgender people should be treated like anyone else, and not be subjected to discrimination. The same principle of equal human dignity should apply.

And in fact the Supreme Court has, in a series of decisions since 1996, acknowledged that we all deserve the same respect for our equal dignity, regardless of who we are or whom we love. In Romer v. Evans, the court invalidated an amendment to the Colorado Constitution, adopted by statewide referendum, that prohibited all government action designed to protect gays and lesbians from discrimination. Writing for the court, Justice Anthony Kennedy stated that the Colorado Constitution “classifies homosexuals not to further a proper legislative end but to make them unequal to everyone else. This Colorado cannot do.”

A few years later, in Lawrence v. Texas, the Supreme Court invalidated Texas’ criminal prohibition on sexual relationships between two individuals of the same sex. Kennedy’s opinion for the court again emphasized the fundamental equal dignity of gays and lesbians: “It suffices for us to acknowledge that adults may choose to enter upon this relationship in the confines of their homes and their own private lives and still retain their dignity as free persons.”

And of course, the Supreme Court’s 2015 decision in Obergefell v. Hodges — acknowledging the fundamental right of same-sex couples to marry — was grounded in the majority’s recognition that “[t]here is dignity in the bond between two men or two women who seek to marry and in their autonomy to make such profound choices.”

Set against this line of cases, the question in Masterpiece Cakeshop is whether we recognize this human dignity, or instead grant companies sweeping license to discriminate against millions of our LGBT neighbors and family members on the basis of personal religious conviction. It’s about whether we allow the perpetuation of second-class status for gays and lesbians, denying them the dignity of participating on an equal footing in civic life. Just as we rejected the conclusion decades ago that the free exercise of religion can justify racial subjugation and segregation, so too should we reject the assertion today that the First Amendment allows gays and lesbians to be subjected to, as Congress put it in 1964, the “humiliation, frustration, and embarrassment that a person must surely feel when he is told that he is unacceptable as a member of the public.”

This conclusion does not require business owners to abandon their own deeply held personal views or endorse someone else’s marriage, any more than providing commercial services to a customer requires business owners to agree with everything the customer believes. It simply means that businesses providing a service to the public are open to everyone on the same terms.

The contrary conclusion — that companies can pick and choose whom they are willing to serve based on who that person is, or whom they love — creates a slippery slope that is perhaps obvious, but that nonetheless bears noting. If a company can refuse to sell wedding cakes to a gay couple on the basis of religious conviction, can restaurants refuse to serve food to divorcees, or families with children born out of wedlock, if the owner’s religious views do not countenance divorce or extramarital sex? Could a hotel refuse to rent rooms to an interracial couple?

The Justice Department argues in a brief it filed in the Supreme Court last week that certain businesses should in fact be allowed to discriminate against their customers when they provide services otherwise open to all. The government bases this striking argument, in part, on the contention that baking a wedding cake is a creative, expressive act that exempts the bakery from nondiscrimination laws. In essence, the Justice Department wants to constitutionalize a right to discriminate based on sexual orientation — which flies in the face of the Supreme Court’s statement in Obergefell that when “sincere, personal opposition becomes enacted law and public policy, the necessary consequence is to put the imprimatur of the State itself on an exclusion that soon demeans or stigmatizes those whose own liberty is then denied.”

Just as the Civil Rights Act of 1964 was not about hamburgers and movies, Masterpiece Cakeshop is — as Charlie Craig’s mother has poignantly explained – not about the cake . It is about whether we classify our own neighbors as second-class citizens based on whom they love, or whether states instead have a legitimate interest in recognizing the equal dignity of everyone in America, and in eliminating all discrimination in public places.

This article is written by Vanita Gupta, the president and CEO of The Leadership Conference on Civil and Human Rights. Previously, she was the Principal Deputy Assistant Attorney General and acting head of the Civil Rights Division at the U.S. Department of Justice until January 20, 2017. The article was originally published at SCOTUSblog.

Supreme Court LGBTQ prospects for the future are a bit unsettling