Deborah Cox has mastered the art of the dance floor, and taken on Broadway with turns in musicals like Aida. She is tackling what could arguably be one of her most challenging roles yet, in The Bodyguard, based on the iconic Whitney Houston and Kevin Costner epic movie. I got to sit down with Deborah to chat about taking on the role in the shadow of the iconic Whitney Houston and making it her own, how this Off-Broadway production differs from the big screen cinematic version, whether or not those soundtrack classic will get the remix treatment, and most of all, what the legendary Ms. Houston would think of her friend and label mate’s turn as Rachel Marron

Yeah it is. There are definitely some pre-conceived notions and pre-conceptions as to what the show is and what it will be. I have not seen the show in the U.K., so I don’t really have a reference point, and I kind of prefer it like that to be honest. I like to interject my own sense of who I think Rachel (Marron) is. I think the expectations are really, really high because we all know this iconic film and have such a connection to it. I think it is just one of those shows. We are here trying to make sure that the storyline is tight and doesn’t come off as a “little ditty” or a review. It’s a really well written story based off of the film. There’s a lot of suspense, there’s a love triangle, and there is a real interesting story between Rachel and Frank Farmer. There are a lot of layers to it that I think people are going to be surprised by.

So much of your material has been your own and so unique to you. Is it difficult to work with a material that is so easily identifiable to someone else and not hear their voice when you are doing it?

In the beginning, it was like that. It’s really because we all know these songs and know them so well. They have left an imprint on our hearts and for me; it was very difficult in the beginning. Now that we are in the rehearsal process and we are going through the scenes, I am really seeing how these songs are woven and threaded throughout the show, and it really is quite brilliant. Songs like “Run To You” is a duet in this production and it’s really done in quite a clever way. The songs come out of the scenes and the scenes come out of the songs. It’s very strategically done and it really keeps the story going. That is what i love so much about this show. 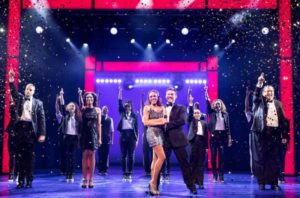 The inevitable question people must want to ask you is what Whitney Houston’s reaction on seeing you perform the music and story that she made famous possibly would be?

She always was a huge supporter of me and supporting my family. Our relationship was label-mates, but we were very involved with Clive Davis, both of us. A lot of things on a personal level I know she would approve of and that she would not approve of. I know for me, knowing my approach to this, she would be very “go on girl”, that was her thing. She always loved when you were shown in your best light. She was such a consummate diva in the sense that it was one of those things that she was so grounded and rooted and such a pro at what she did. She could be on stage with anybody and not feel lesser than or that she needed to dim her light. In this role, she would just be completely encouraging. She was just that kind of spirit; she was not a catty person at all, there was definitely camaraderie.

When you did the legendary duet “Same Script Different Cast”, you do know it was an epic moment for the gay boys in nightlife! You can still go to a gay bar in America and if they play that, the boys will want to turn it out!

Yes! They will get out there and turn it out! I’ve seen videos; received Facebook messages, and Instagram messages, social media will let you know. It’s so funny and so endearing. It just makes me smile.

Speaking of that dance floor, you recently reunited with Tony Moran and along with Ana Paula, did a fantastic mix of the classic “The Girl from Impanema.”

Oh thank you, I love that version! Tony is so fierce, and he and I have done so many great songs together.

You know, it’s funny, you have worked with countless people, yet the music you have done with Tony Moran, as well as with Hex Hector, really seems to be on another level and almost takes on a life of its own. What do you think it is about your collaborations that make it almost “lightning in a bottle” of sorts?

You know, I think every artist has their muse and they just can continue to bring out that little something special that can be brought out. The intention was to collaborate, but when that muse and that magic hits, its just unspoken. It turns into something else, it’s a moment, a real moment. I think that’s really what it is.

Speaking of remixes, any thought on remixing some of the tracks from The Bodyguard soundtrack? What a treat it would be to hear your take on some of those classics!

We have talked about it actually. We’ve explored that idea but we haven’t made a final decision yet.

Do you find it a positive experience or very jarring to be in front of a Broadway crowd as opposed to a concert of a pride festival crowd?

I prefer it actually. I prefer being part of the telling of a story, part of a production. I love that I am able to act, sing and dance, where as with concerts, I still love it, but in a different way. There is just nothing like musical theatre and being a part of a big story and making sure that story resonates and connects. That’s the beauty of this piece, its like all of these ionic songs that everyone knows. Beautiful music with an amazing script that’s written in a way that you can still tell a compelling story, still feel the suspense and the love story, and all of those things, all the mixed emotions all in one show. That for me, is the icing on the cake; it’s a dream role.

Oh wow.  I would tell her to keep dreaming and be fearless, because that’s what it’s taken for me. It’s taken an act of fearlessness to be able to step outside of what people expect me to do. When I came into the game I started out doing R&B music, but I also love jazz, and I love dance music, and I love pop music. I wanted to be able to infuse all of those styles into what I do. The industry though, doesn’t always allow the little black girl to sing all of these different styles. That’s kind of what I was coming up against in the beginning and I didn’t really understand it. I was kind of growing a little discouraged as well. Having the opportunity to explore and be fearless and step outside the box has allowed me to have the kind of career that I have had and that’s what I love most about the journey. That’s what I would tell my younger self- be fearless, don’t be afraid. That fear will just keep you back and you’ll live in regret.

The Bodyguard  runs through January 2017 at the Paper Mill Playhouse

Visit http://www.papermill.org/shows-tickets/season-calendar/view/2303.html for tickets and information.

“American Rookie” offers a look at assimilation into American society

“A Christmas Carol” holds up well on its fourth go-around

“A Christmas Carol” or, the tragedy of loneliness

“My Life on a Diet”: Renée Taylor, ladies and gentlemen, and what a life she’s led!

“The Nice Man Cometh” is a glowing play about starting over