“Cyrano” is a revised classic filled with romance, humor, and panache

Two River Theater kicks off the 2019-2020 seasons with Cyrano, an adaptation of Edmond Rostand’s play Cyrano de Bergerac. Cyrano, adapted by actor/playwrights Jason O’Connell and Brenda Withers, is a skillful adaptation for a cast of five of Rostand’s original with subtle contemporary references. It is a sheer delight and an excellent choice to open Two River’s new season. It is also an excellent companion piece to two other recently-opened productions in New Jersey, Shakespeare Theatre of NJ’s lovely As You Like It and McCarter Theatre Center’s powerful Gloria: A Life. 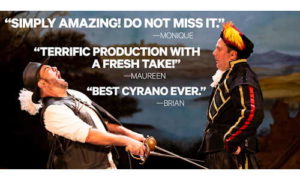 By now, everyone is familiar with Rostand’s plot and characters. Cyrano is a soldier/poet with a rapier wit and deadly swordsmanship, utterly fearless and disdainful of both hypocrisy and mediocrity. He is in love with his cousin Roxane yet is convinced no woman could love him due to his nose. Roxane loves Cyrano as a brother but has been smitten by the handsome young cadet Christian, sure that his handsome exterior contains a lyrical poetic soul. Unfortunately, it does not, so Christian prevails on Cyrano to provide the words that will win Roxane.

The aristocratic Count DeGuiche, a rejected suitor of Roxane’s and the leader of Cyrano and Christian’s regiment, orders both men to the front on Christian’s wedding night. The course of war affects all the characters and leads to Roxane, many years later, ruefully realizing too late the true identity of the man whose words so moved her.

Meredith McDonough gracefully guides the cast through the dazzling character changes and powerful emotional truths in O’Connell and Withers’ play. The cast is outstandingly talented. Nance Williamson takes on Roxane’s duenna as well as being Cyrano’s friend LeBret, a slow-witted monk, and someone listed only as an nsavory Character with comedic verve. Chris Thorn is the spiteful Count DeGuiche as well as the untalented actor Montfleury and poet/pastry chef Ragueneau. Luis Quintero as Christian portrays a callow, lovelorn youth who awakens into a deeper understanding of what love truly is and can be, giving a subtly affecting performance. Britney Simpson is a radiantly lovely Roxane who combines an open girlish heart with intelligence and strength of will that demands a mate with truth and spirit. Yet she is enough of a romantic to imagine outward beauty is a guarantee of those inner virtues she seeks.

Rising above them all is the larger-than-life Cyrano of co-author Jason O’Connell—extraordinarily brave, dazzlingly witty, a master of all he sets out to do. When the ham actor Montfleury insults his nose, Cyrano comes back with over a dozen wittier, better ways to be insulted, all while dueling with the hapless actor. In fact, it is Cyrano’s perception of the ugliness of his nose and his over-sensitivity about it that is his major weakness, robbing him of the chance for true love and true happiness, strengthening the wall of deflective wit around his heart. It is Cyrano’s deep unspoken love for Roxane, his desire for her happiness, which drives his actions throughout the play. It is his deep sadness that wins the audience to his side time and again. His dazzling humor keeps the audience in high spirits.

Two River Theater‘s production staff rises to the standard of excellence that is a hallmark of productions at this venue. Kirsten Robinson’s set, lit by Paul Toben, switches easily from a theatre interior to the garden outside Roxane’s house to a battlefield in the south of France and a convent courtyard. The sound design of Palmer Hefferan encompasses a variety of aural cues from cannon fire to birdsong. Jessica Wegener Shay’s costumes enhance character yet are perfectly designed for quick changes as required.

For an audience hungry for a show—a romance, an adventure, a comedy—that requires their willing collaboration, Cyrano is a must-see production. This is a classic play, tastefully and lovingly adapted for a modern audience. It has a mind and a heart and is an absolute joy to see. I strongly encourage you to make the trip to Red Bank’s Two River Theater to see Cyrano.

Cyrano is presented by Two River Theater at the Rechnitz Theatre in Red Bank through October 13, 2019. For tickets and information, visit tworivertheater.org.

“Scab” is a searing indictment of modern business