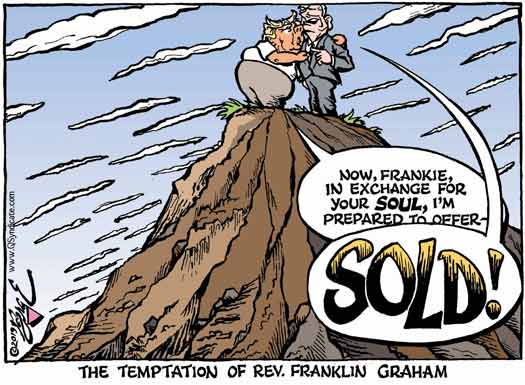 Hello and welcome to a world where a gay man with the word “butt” in his last name is running for president and it is not a joke. Pete Buttigieg, who has been mayor of South Bend, Indiana, since 2012, is an absolute contender in a crowded Democratic field. He made headlines when he kissed his husband Chasten Buttigieg IN PUBLIC. It is honestly shocking the hell out of everybody, right and left. Although it’s just the conservative right that is calling Buttigieg’s rise demonic and saying he should be put to death.

Also, his last name is pronounced “boot edge edge” and once you figure out how to say it, you will find it is truly delightful and you will never want to stop saying it. I’m thinking of getting a second dog just so I can name him Buttigieg. And I mean that as the highest compliment.

Right-wing Christians are going absolutely bonkers over Buttigieg, and not in a good way. I mean, they didn’t overlook Trump’s breaking just about every commandment just so they could see a homo in the White House, amirite!?

Take Franklin Graham, for example. He has said of Trump’s election, “I think God put him there.” Buttigieg, though? Not so much.

Referring to protesters who shouted ‘Sodom and Gomorrah’ at Buttigieg during an Iowa rally, Graham wrote on his Facebook page, “I don’t agree with heckling anyone—I think we should be respectful.”

What awful thing did Graham say about Buttigieg after he preached “respect”?

I mean, why heckle him when you could put him to death?

Did Graham call for Buttigieg’s murder? Not in those exact terms. But he did cite Leviticus 20:13, a Bible verse that says homosexuals “have committed an abomination; they shall surely be put to death; their blood is upon them.”

I mean, he didn’t say that part out loud, but he didn’t have to.

Buttigieg reportedly told the protesters, “The condition of my soul is in the hands of God.”

And Graham took issue with that.

“Mayor Buttigieg is absolutely right,” Graham wrote. “His soul is in the hands of God, so is everyone’s. He also says that he’s a Christian and wants to become the first openly gay president in America’s history. What’s wrong with that picture?”

Um, nothing? I’m going to go with nothing.

“Being a Christian isn’t just a title we select or a church membership,” Graham continued. “It is a faith in God and His Word that transforms our lives to be more like the One we follow—Jesus Christ. Jesus said, ‘If you love me, you will keep my commandments.’”

In other words, Graham isn’t impressed that Buttigieg professes to believe in God because Buttigieg is a homo and those things are incompatible.

So after essentially saying being a gay Christian isn’t a thing, Graham plays the Leviticus card.

“Hate the sinner, not the sin” thing

“The Bible makes it very clear that homosexuality is a sin. ‘If a man lies with a male as with a woman, both of them have committed an abomination,’” Graham wrote, citing Leviticus 20:13. “That’s what God says and that settles it for me. I stand with the Word of God. I care enough about people to tell them the truth and to warn them about the judgment to come for all sin.”

So you see, by indirectly calling for Buttigieg’s death, Graham is actually just doing him a solid by warning him because he cares. It’s the whole “hate the sinner, not the sin” thing. Wait, I got that right, right?

Essentially Graham’s invocation of the “kill the gays” part of the Bible was basically just a great big no-homo bro hug.

Also, as far as I know, Buttigieg is still on his first husband, hasn’t paid off an adult film star to keep silent about their affair, doesn’t brag about sexually assaulting people, has actually served in the military, sees brown and black people as human beings, and doesn’t think poor people are gross. Buttigieg probably knows how to read and isn’t even afraid of stairs. At this rate, Buttigieg will never reach Trump-Level Christian, and seeing as that’s the only kind of Christian Graham and his followers care about, the Graham and Buttigieg bromance was over before it even started.

I suspect that’s a pretty big relief to Chasten Buttigieg. Then again, the Buttigiegs are clearly very much in love. And ain’t no God worth worshiping sad about that.

Creep of the Week: Libs of TikTok