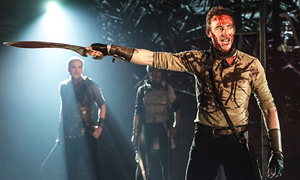 “Coriolanus” features actors who might be little known here, but be assured that they are quite famous in the UK. During the HD show intermission, it was said that the entire Donmar Warehouse run was sold out in days. What a treat this HD presentation is.

“Coriolanus” stars Tom Hiddleston. His credits include “The Avengers,” and the film, “War Horse,” as well as the Shakespearean trilogy, “The Hollow Crown” (available on DVD), he has famously been named MTV’s “Sexiest Man in the World,” which accounted for the preponderance of females of every persuasion at the Pollak Theatre on the Monmouth University campus in West Long Branch.

Mr. Hiddleston was a very believable killing machine, who time and time again threw himself at Rome’s enemies in patriotic zeal. We meet him at a great victory over the Volscians, for which he is widely acclaimed by the noble Republicans. He is disliked by the two Tribunes who represent the common people. They easily control the fickle mob to oust Coriolanus. Being banished, Coriolanus joins forces with his enemy, and nearly conquers Rome, which is saved by his mother’s pathetic pleas. Coriolanus’ clemency dooms him to death at the hands of the Volscians.

Prevailing criticism usually faults Coriolanus, who being a patriot, is not a very good liar, and therefore, not a very good politician. Coriolanus may also be seen as another Hamlet, or even another Othello, as one who may love well, but not too wisely. It is because he will not lie, or play political games, that he meets his doom. In a sense, he is too noble and idealistic to live in an imperfect world.

Included in this starry cast was Hadley Fraser as Aufidius, the leader of the Volscians, and Coriolanus’ enemy, who spoke in a difficult Scottish accent to differentiate himself from the Romans, as he states in a blog interview. Director Josie Rourke instructed both Hiddleston and Fraser to not shy away from the homoerotic moments in the play between them, but to play them up, much to the delight of the audience. Deborah Findlay was Volumnia, Coriolanus’ patriotic mother, who reveled in her son’s scars as proof of his nobility. Virgilia, his wife, was played by the beautiful Birgitte Hjort Sorenson, who is a TV star in the UK (“Borgen”). The starry cast included Mark Gatiss (of “Sherlock” and “Dr. Who”) as Menenius.

The evening was a Donmar Warehouse production of Shakespeare’s “Coriolanus” presented in HD by the National Theatre, and its fine actors.

You may well ask “Why travel to see this? Surely, it is playing somewhere close by.” The answer would be no. It isn’t playing anywhere nearer. One reason could be the little- known fact that the Metropolitan Opera forces venues which air their live in HD operas to sign a “no-competition” contract, forbidding venues to show competitor’s product. This means that any operas from La Scala to Covent Garden as well as the Bolshoi Ballet cannot be shown wherever the Met’s operas are seen. Being a university, Monmouth University is somehow exempt, no doubt because it is a not- for- profit, educational institution.

The next presentation at the Pollack Theatre will be a rebroadcast of the 2011 “Frankenstein” on February 13. For more information: http://ntlive.nationaltheatre.org.uk/

Coriolanus: A timely lesson in politics, honor, and pride

A roadmap to LGBT politics in the New Year