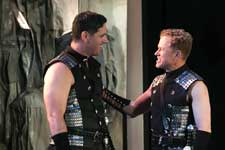 Many people who are devotees of Shakespearean drama may look puzzled when the tragedy Coriolanus is mentioned. Rarely produced, this play was written in the latter part of Shakespeare’s career. Yet, as with more highly regarded plays in the Bard’s canon, Shakespeare manages to touch on universal themes – this time, the nature of politics in a republic, class warfare, and the thin line between self-dignity and overweening pride.

earn the official nickname “Coriolanus”. Upon his return to Rome, Coriolanus is greeted not as the savior/hero of the city but as an opportunist seeking to contain all political power in himself. When urged by the patrician class to which he belongs, and at the entreaty of his formidable mother Volumnia, Coriolanus reluctantly agrees to run for the office of Consul.

This requires getting the support of the plebeian (non-noble) class, led by the rabble-rousing tribunes Brutus and Velutus, by swallowing his honor and pandering for their votes. Coriolanus, spectacularly unable to change from general to politician, ends up being banished from Rome, accused of treason by the two tribunes.

Coriolanus heads to the Volscians and General Aufidius. The Roman offers his enemy the choice: killing him, or accepting his services as the Volscian army prepares to attack Rome

The realization that the man they banished has allied with their oldest enemy throws all of Rome into a panic. Pleas from the plebeians, the tribunes, and the patricians are all met with the same answer: the Roman equivalent of “F**k you all.” In a last-ditch effort, Volumnia, along with Coriolanus’ wife Virgilia and son Martius, travels to Volscia to beg for mercy on Rome.

As Aufidius looks on, Volumnia manages to guilt-trip her son by playing on his regard for his honor and his place in history. Now seeking a bloodless victory, Coriolanus hammers out a peace treaty between Rome and Volscia, only to find himself accused of treason by Aufidius for not sacking Rome as he had intended. Reminded of the deaths Coriolanus has caused in past conflicts, the Volscian soldiers, led by Aufidius, go after the Roman general.

I have nothing but praise for the acting ensemble. Of the leading players, I pick out for special mention Greg Derelian in the title role, knowing exactly how Rome should be run, unwilling to suffer the short-sightedness of the plebeians. 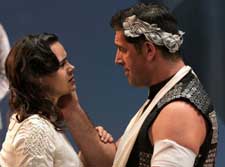 Derelian’s Coriolanus is well matched by Jacqueline Antaramian’s Volumnia, using every motherly manipulation to bend her only son to her will, and Michael Schantz’ Aufidius, equal to Coriolanus in his pride and resentment. Bruce Cromer is Menenius, a patrician politician who mistakenly fancies himself one of Coriolanus’ close advisors. John Ahlin and Corey Tazmania, as the tribunes Brutus and Velutus respectively, run the gamut from vengeance to denial to fear to hypocrisy without turning their characters into caricatures. They and the rest of the cast were well-served by the direction of Brian B. Crowe, who is in his twenty-first season with the Shakespeare Theatre, and who directed last year’s airy outdoor version of Love’s Labour’s Lost.

Dick Block designed a versatile unit set with two large sliding panels which were open to indicate the public spaces of Rome and closed when in Volscia, ably lit by Andrew Hungerford’s lighting designs. Being a large cast show, the costumes of Tristan Raines, making his Shakespeare Theatre premiere, helped make you instantly aware not only of the city you were in, but the different classes of the people.

While I found myself loving the characters and the actors who brought them to life, I did not love the play itself. However, given the nature of the political beast, whether in ancient Rome, the early 1600’s when the play was written, or today’s social-media-driven world, this is a play that will always find its parallels in whatever time it is produced. This is a play that has the rare gift of setting up lively discussions on the nature of politics and its effects on candidates long after the final curtain falls. I strongly urge both the serious theatregoer and the serious political thinker to see this production of Coriolanus before it closes.

“Scab” is a searing indictment of modern business

“The Last Supper” is a musical about going to extremes