On a recent summer weekend I was surprised to hear a true singer I’d not heard of before. Part of the surprise was that she was on a modest stage, a performance trailer, at the Newark Gay Pride Festival, which was the smallest festival I’d ever attended in New Jersey.

The happy surprise was how beautiful and true a voice Chrystal Atmosphere has. What I heard could have earned her a slot on “The Voice”.  (That’s meant for comparison only, as they say, not to endorse “The Voice”, but I’ll admit the auditions are a guilty pleasure.) 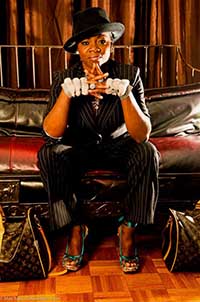 Chrystal sang with a sensitivity and strength good enough to be a contender, and good enough to carry her joyful voice beyond the park and into the city without a microphone. Her voice carried love for the people throughout the crowd.

I stood, slightly stunned, on the sidelines, asking friends nearby whether I was imagining things. No, she’s good, they each confirmed – really good.

I hope to hear much more from her in the future. Spread the word NOW.