This is the first known study to examine the relationship between school victimization during adolescence–specifically related to sexual orientation and gender identity–with multiple dimensions of young-adult health and adjustment. Researchers say it demonstrates the importance of addressing and preventing anti-LGBT victimization at the structural or school level to reduce health disparities among LGBT young people. The study is published in the Journal of School Health, a publication of the American School Health Association.

Analyzing data from the Family Acceptance Project’s young-adult survey, the authors examined experiences related to school victimization during adolescence based on known or perceived LGBT identity among 245 young adults, ages 21 to 25. They found that LGBT young adults who were victimized in school because of their LGBT identity reported much higher health and adjustment problems, while students with low levels of school victimization had higher self-esteem and life satisfaction as young adults.

“We now have evidence of the lasting personal and social cost of failing to make our schools safe for all students. Prior studies have shown that school victimization of LGBT adolescents affects their health and mental health. In our study we see the effects of school victimization up to a decade later or more. It is clear that there are public health costs to LGBT-based bullying over the long term,” said lead author Stephen T. Russell, Ph.D., Distinguished Professor at the University of Arizona.

It is clear that there are public health costs to LGBT-based bullying over the long-term,” said lead author, Stephen T. Russell, Ph.D

Director of the Family Acceptance Project at San Francisco State University and study co-author Caitlin Ryan, Ph.D., pointed out, “The pervasiveness of bullying and lack of research on outcomes in adulthood have masked the serious long-term health costs for LGBT children and youth. These new findings will help providers and school advocacy groups understand the critical role families can play in preventing and managing victimization and the importance of our work in engaging and teaching parents and caregivers how to support and advocate for their LGBT children in families, schools and communities. The focus on serving LGBT youth primarily in peer-only spaces has prevented families and caregivers from learning the skills they need to advocate for their LGBT children.”

Ann P. Haas, Ph.D., director of prevention projects for the American Foundation for Suicide Prevention, said, “This new study provides compelling evidence that negative environments pose long-term health and mental health risks for LGBT youth. The Family Acceptance Project’s growing body of research is building a solid foundation to develop preventive interventions to deal with the harmful effects of anti-LGBT environments on young people in their families, schools and communities.”

Commenting on the study’s findings related to sexual health risks, Sean Cahill, Ph.D., managing director of public policy, research and community health for Gay Men’s Health Crisis, noted: “This is helping us understand the social parameters of risk for LGBT youth by expanding on their work with families to show that school experiences also contribute to sexual health risk and risk for HIV among LGBT young adults.” 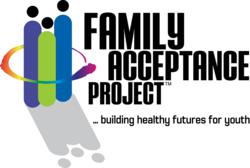 As the HIV epidemic continues to escalate among young gay and bisexual men and transgender women, and especially black gay youth, researchers say that this study provides important evidence of the public-health need for structural interventions and targeted antidiscrimination policies in our nation’s schools to prevent HIV and other serious health problems.”

The Family Acceptance Project is a community research, intervention, education and policy initiative, affiliated with San Francisco State University. On the Web at http://familyproject.sfsu.edu.

Positive Thoughts: I had to get past the stigma of having HIV

Three ways to touch someone you love

5 secrets to a Happy Holiday