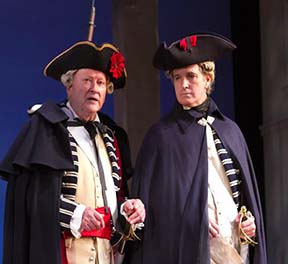 “Everybody loves rainbows,” Charlie Katzenbach says, talking about the inspiration for her artwork. She believes that rainbows communicate a joyful feeling. Rainbows also symbolize hope— hope for the artist as a transgender individual, and also for the larger LGBT community. But for Katzenbach, rainbows are more than an LGBT symbol.

Rainbows fascinate her, offering the full spectrum of light colors. “In my studio I have crystals all around,” the artist says. “I have an immense joy trying to catch that rainbow, seeing that breaking of color in my work.”

Listening to Katzenbach’s creative process, one may feel as if being let in on a secret of making art from rainbows and light. The artist uses stripes of glass, “plays” with transparencies, and enhances the intensity of light by placing mirrors behind the art piece.

The artist likes to paint on the north side of the room, to see how the art piece transforms with the change of light falling on it… as it happens in works like Ikea Rainbow; or watch the rainbow as it shifts in The Tower. A sense of freedom comes through in Castro Waving, which is inspired by the huge rainbow flag that flies at the top of the Castro.

Katzenbach recalls the liberating feeling she experienced seeing the flag during her visit to San Francisco.

She loves working on glass and uses mineral colors because they last longer. Glass keeps the paints as viable as the day they were applied, and carries the paint through its edges, intensifying it.

The process of creating a piece of art using glass and paint is a meticulous one. She paints on pieces of glass, and then presses the pieces together and silicones the edges, so that the paint will be wet 100 years from now. “Had a piece break on me once,” Katzenbach recalls. “There was a deer and I hit the brakes. There was paint all over my car.” The glass had kept the paint wet, as fresh as it was when the piece was created.

Sometimes she combines rainbows with equality signs in her art. She used tiles of glass and rainbows that reflect the equality sign to create pieces like Out of the Closet. Viewers— straight or gay— can see themselves as part of the rainbow.

Katzenbach finds inspiration not only in rainbows and the way glass breaks the light into its colors, but also in geometric forms, in particular squares and circles. “My geometrical work started in high school, my arithmetic was terrible,” she says. “I was called the Mandala Man at Princeton.” She studied religion at Princeton University, and then earned her master’s in industrial arts. She further explains that circular design gets individuals into a meditative state. “If I can pull somebody into a work, get somebody to pause and look at the piece for a few seconds then I can communicate with that person,” she says. In a world of continual multitasking and distractions, people have to let their eyes rest every now and then, on a piece of art, for example.

Her favorite piece of art is whatever one she’s looking at in the moment or, oftentimes, the piece that’s in her mind. Katzenbach loves to show her work, and likes to get people inside her world. She shows her work at Artists’ Gallery in Lambertville, and once a year, she opens her own gallery— her barn— to the public. Her upcoming show, Namaste: An Exploration into Vibrant Indian Culture, opened in September at the Alpha Art Gallery in New Brunswick, NJ.

Katzenbach transitioned about a year ago and talks candidly about her coming- out process. “It is terrifying because we all want to be respected in our communities. And you wonder what’s gonna happen. Will they throw stones?”

While more people transition nowadays, they also disappear after their transition. They are hesitant, fearful to talk about who they were and help significant others understand. Katzenbach does not shy away from questions. It has taken her a long time to fully transition, but she distanced herself from that fear, and painting has helped her throughout the process.

Charlie Katzenbach artpiece used on the October-November 2013 cover of Out In Jersey magazine is called “Equal Time.”

Individuals transition at a younger age lately, and she believes it’s wonderful for people to be able to have and live their lives rather than a lie. But she also believes that, most important, a person has to find some form of satisfaction that isn’t gender-related.

Had she come out years ago, she truly believes she would have been murdered. That’s why she had to wait. Even today, the suicide rate among trans youth is 41 percent. She advises young trans individuals to wait for the right time to transition. “Find acceptance and happiness in your life— as it is now— because your transition won’t change that,” she says. “Transition is never easy. It is like giving birth to yourself.” Even more important, she adds, “Learn to live a life beyond your wildest dreams.”

Author Alina Oswald is a writer, photographer, and the author of Journeys Through Darkness, a biography of AIDS. Contact her at www.alinaoswald.com .