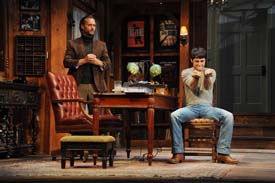 Russia is a very, very difficult country to stick a pin in, as LGBT activists are discovering in their rage over that government’s recent anti- gay legislation. After you’ve demonstrated in front of the embassy and trampled a flag or two, what can you do to make that rage felt? The immediate response by many gays and many gay nightclub owners has been to boycott the popular Stoli vodka, as being the only Russian sounding consumer product ready to hand.

In doing so it is becoming clear they are making a huge mistake. To begin with Stoli has been among the most consistent and open handed supporters of almost every LGBT event in the country. There are many Pride festivals around the world that in the past had Stoli as a sponsor. The Stoli website is plastered in rainbow colors even today and the company has always been a strong supporter of LGBT rights.

In thus biting the hand that has generously fed us, we are not even biting a Russian hand! Stoli is not a Russian company and the vodka itself is made and mainly in Latvia and bottled here in the U.S. Val Mendeleev, CEO of the SPI Group, which owns the Stolichnaya brand, stated the following after the “Dump Stoli” boycott was proposed by gay writer Dan Savage,  noting that his company has been “inaccurately link[ed]” to the Kremlin.

“The Russian government has no ownership interest or control over the Stoli brand that is privately owned by SPI Group, headquartered in Luxembourg in the heart of Western Europe,” wrote  Mendeleev last month. “We fully support and endorse your objectives to fight against prejudice in Russia. In the past decade, SPI has been actively advocating in favor of freedom, tolerance and openness in society, standing very passionately on the side of the LGBT community and will continue to support any effective initiative in that direction.”

A  Latvian gay rights group called Mozaika has urged activists not to boycott Stolichnaya because the vodka that protesters have been dumping is actually manufactured in Latvia. “All Stolichnaya vodka for worldwide export is produced in Latvia. Stolichnaya is produced by the Latvian company Latvijas Balzams and production takes place in Riga,” the group said in a statement to Gay Star News.

This is far from the first time Dan Savage has gone off half- cocked but if it embitters the management of a company that has consistently gone out of its way to support our community, it will likely prove to be among his more damaging mistakes.

Dan Savage, the creator of the boycott, said in response to critisicm. “SPI is a Russian corporation, Stoli is a Russian vodka. And while it’s nice that SPI is willing to market to homos who are lucky enough to live in Austria, the US, and South Africa, what has SPI done in Russia?”

Many more well informed LGBT activists have expressed concern that this boycott does nothing except make gays look like a bunch of ignorant ingrates.

There are very few  actual Russian businesses operating on a consumer level in this country but one that is, is Lukoil.  Lukoil was formed in 1991 when three state- run, western Siberian companies named after the respective towns in Khanty– Mansi Autonomous Okrug  where each was based, Langepasneftegaz, Urayneftegaz, and Kogalymneftegaz, merged. The initials of the three companies are preserved in the name Lukoil.  Vagit Alekperov  the Soviet deputy minister of oil production, came to believe the only way Russians could compete against western companies was to copy their business model. He organized the giant company to manage exploration, refining and distribution in the same way as a western oil company. It is one of the largest tax payers of the Russian Federation, and the amount of taxes paid in 2010 is US$30.2 billion.

In April 2013, Lukoil agreed to buy Hess Corporation’s Russian unit for $2.05 billion. A considerable slice of its stock is owned by the Russian government. If gays want to get Putin’s attention, supporters of LGBT civil rights located here in New Jersey and Philadelphia and sympathetic drivers using the New Jersey and Garden State Turnpikes should launch a boycott of Lukoil’s American gasoline stations.

Strangely, this obvious boycott target has so far escaped the notice of LGBT activists.