Creep of the week

God bless the people in Colorado who hung up rainbow “Make America Gay Again” banners outside of the home Vice President Mike Pence and his family were staying in while on vacation at the end of December (last year, even!).

Nobody deserves to be dragged for anti-LGBT past, present, and future more than Pence. His actions as Indiana’s governor and in Congress are well documented, including signing a license to discriminate bill and supporting “reparative” therapy. But because Pence doesn’t Tweet deliriously in the middle of the night or rant incoherently before TV cameras, he’s largely been ignored by the media at large. 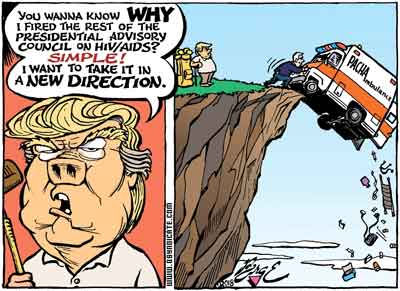 With impeachment on so many 2018 wish lists, it’s important that we take a look at the man behind the dark curtain that is Trump’s presidency. Please note that I am not, as some have, arguing that impeaching Trump would leave us with Pence, therefore impeachment is a bad idea. Trump absolutely deserves to lose his job. He is a terrible failure and wholly unfit for office. But Pence, too, needs to go.

I look at it this way: while Trump is a tumor exploding on the surface, Pence is a quiet slow growing cancer. Both will kill you, one of them just gets earlier and more attention.

Trump’s insane first year makes Pence seem almost harmless, but he is anything but. He supports all of the same polices and certainly would be nominating the same anti-LGBTQ judges to lifetime appointments.

And that’s IF Trump is impeached. It’s a big “if.” Republicans control all of the federal government right now. They are not going to impeach their dear leader.

In 2018 the country’s future depends on Democrats or, more importantly, voters choosing Democrats.

Are Democrats perfect? Nope. Not even close. There are so many things that need to be addressed by the Democratic Party, many of them things that the party should have been working much harder on for decades now, like racism and social inequality. Some Democrats are shitty people who benefit from the status quo and don’t really have any interest in changing things. Those Democrats need to be primaried by people who stand for actual change. Voting for Democrats doesn’t mean accepting the party where it’s at. We must push Democrats to be better.

Change is slow. To those of us who are marginalized, oppressed, and discriminated against, change feels urgent and demands immediacy. Unfortunately, that’s not how change works. It is incremental. And I understand that people, including me, have a hard time with the whole “incremental” business. The Democrats are the party of the increment. The progress is slow, but the aim is forward. The Republicans often seem to move much faster than the Democrats (take, for example, the swift pace Trump has been appointing terrible right-wing judges). But the pace is an illusion. The Democrats seems to move slowly in comparison to the GOP only because it takes longer to build a house than it does to burn it to the ground.

And our country is on fire right now. There’s this idea that our Republic with continue on no matter how we abuse it, but that’s wishful thinking. People who previously weren’t “into” politics are paying attention. We’ve seen thousands take to the streets over this past year to protest the Trump administration’s harmful and hateful policies. We need all of those people and more to vote.

On New Year’s Eve, writer and civil rights activist Shaun King Tweeted, “I sincerely believe that 2018 will be a year of victories. I believe we will win many hard fought battles and will make more progress on other ones than any year in recent memory.”

In other words, 2018 is going to be exhausting, but hopefully in the opposite way 2017 was.

D’Anne Witkowski is a poet, writer and comedian living in Michigan with her wife and son. She has been writing about LGBT politics for over a decade. Follow her on Twitter @MamaDWitkowski.

Creep of the Week: Libs of TikTok