The Paper Mill Playhouse in Millburn has taken an old favorite, polished it up, and presented it as a glittery gift for this holiday season. It’s Annie, the Depression-era fairy tale of goodness triumphing over adversity. Winner of seven Tony Awards, the musical, based on the old comic strip Little Orphan Annie, features a score by Charles Strouse and Martin Charnin which is by turns scathingly funny, heart-touchingly sweet, and rousing, well-complimenting Thomas Meehan’s book.

By now, everyone knows the story: Annie lives with six other girls in a municipal orphanage overseen by the grotesque Miss Hannigan. Chosen to spend the holidays with billionaire Oliver Warbucks, she wins over his cautious heart and he decides to adopt her. Annie, however, believes her real parents are alive, so the heartbroken Warbucks enlists the FBI and President Franklin D. Roosevelt on a massive manhunt to find them. It all comes to a climax on Christmas Day as everyone gathers at the Warbucks estate. 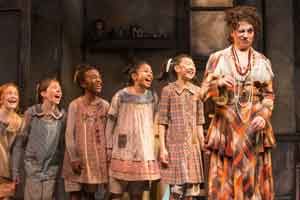 Walking away with the show is Tony Award-winner Beth Leavel as the outrageous Miss Hannigan. A creature of pure spite and greed, her first-act number “Little Girls” lets us know in no uncertain terms just how much she hates the children in her care. Hannigan’s partners in crime — brother Rooster, played by Cooper Grodin, and his traveling companion Lily St. Regis, played by Kim Sava — provide additional cartoon villainy as the trio plots to use Annie to reach “Easy Street”. On the side of good are Erin Mackey’s Grace Farrell, Warbucks’ executive secretary who plucks Annie from the orphanage, and Christopher Sieber’s Oliver Warbucks, the bald billionaire who slowly warms to Annie’s presence in his lonely life. Of the supporting cast, Tessa Noelle Frascogna is an adorable scene-stealer as the littlest orphan Molly; Anneliza Canning-Skinner as A Star to Be displays an amazing voice in the “NYC” production number; and David Hess as Warbucks’ major domo Drake offers lively comedic bits of business. 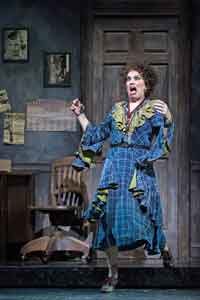 Of course, no production of Annie succeeds without a strong performance of the title character herself. Cassidy Pry, one of the two girls alternating in the role (the other is Peyton Ella), is as optimistic and full of gumption as the cartoon character she embodies, and her rendition of the show’s anthem “Tomorrow” is stirringly sung. You could actually believe this Annie inspired FDR to create the New Deal! 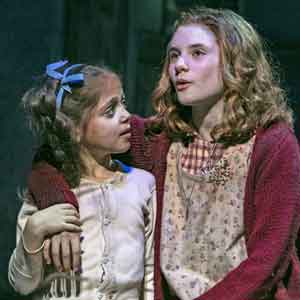 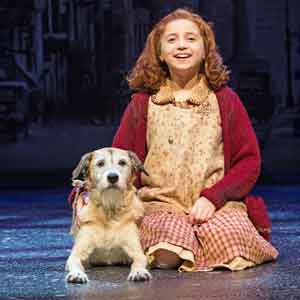 I do have a few quibbles about this production. Christopher Siebert’s portrayal of Warbucks seemed a little stiffer, a little colder than other portrayals I’ve seen, not really connecting with Annie until the second-act ballad “Something Was Missing.” One wall element of the set of Warbuck’s home appeared, from where I sat, to not fully connect to the rest of the wall. And, as a stylistic choice, I would have liked to have seen Annie just once in the iconic red dress and curly-haired do made familiar by the comic strip. Still, these are not things that prevented the opening night audience, myself included, from falling under the spell of this now-traditional holiday musical.

Long a favorite with audiences of all ages, Annie is a perfect choice for Paper Mill Playhouse’s holiday offering. Theatre-goers of all ages are guaranteed to have a fine time with this warm-hearted musical. You won’t regret making the trip to Millburn to spend the holidays with Miss Hannigan, Oliver Warbucks, and that irrepressible little orphan, Annie!

Annie is presented by the Paper Mill Playhouse in Millburn through December 31st. For tickets and information, visit papermill.org