Former Marine Alex Minsky has gone from losing his leg while stationed in Afghanistan, to becoming a successful, yet unlikely model. While Minsky has encountered a few bumps in the road, his story is one of success beyond adversity, which is why Minsky has become a darling of the LGBT community as well. Alex spoke about his path to standing in front of the camera and how it feels to be a gay icon.

Your story is an extremely inspiring one. How is it that you are able to come out on the other side and be such a positive voice for not only yourself, but for the many fans that you have?

Alex: I don’t really see my own setbacks as better or worse than anyone else’s really. I know that a person’s biggest setback or problem is exactly that, their

problem, my world is totally different than someone else’s world. Basically, I just don’t give up. I did not see what happened to me as a “problem”, I just got down to work right away on recovering.

There were some times though, when I left the military to the day I started modeling that I was not doing so well at all. I was just existing and taking up space, and not producing anything at all. I was drowning myself in alcohol. To me it was the easiest thing to solve my problems…  at the time. I thought that drowning myself in whiskey and vodka was the answer.

Were there ever times that you really thought about completely giving up?

Alex: I thought that it was going to be my life. I had a period of my life before the Marine corps, and I was in the Marines for almost exactly three years. Then I got out, and then I was a drinker. It’s my job now; it’s my job to go to the bar every day and keep all of these places running; if I don’t go, what would they do without me? I found out though. That couldn’t be farther from the truth. I haven’t been to these bars in over eighteen months and the places are still running.

Your life certainly has taken a turn, as you are now one of the most interesting models in recent memory. In terms of fitness, do you have an special tips or routine that you follow to stay in top shape? 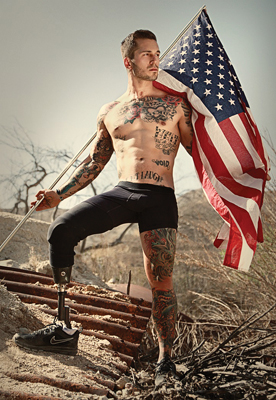 Alex: It is an every day thing really. Not so much to work out, but in terms of nutrition, working out and just fitness in general it really is a lifestyle. The whole “not drinking” thing definitely helps alot with that lifestyle, so they really go hand in hand. I have to look a certain way to be a model, and that plays into the fact that I have to be sober. If I stay sober, it’s easier to look that way, so it really is a full circle.

Within the LGBT community, you’ve become somewhat of an unintentional gay icon. How does it feel to be a voice for a group of people that you probably never thought that you would be a voice for?

Alex: I really appreciate it, and I like it. I just want people to be happy really. If it makes people happy to stare at my pictures, then I’m fine with it. I’m not conceited enough about myself to think that I’m this “big deal” or that I’m changing things, I just keep going.

For the first six months after my pictures were taken, we were really holding off on releasing my pics to the gay community, but looking back, I’m actually glad we did. When we reached out to the blogs, magazines, and web sites, I had a few more photographs to for people to be able to choose from.

There were also some other shots that came out of you that you perhaps would not have chosen to release to the public – given the choice. Is it frustrating when pictures that you did not want released to the public are released?

Alex: Obviously, if the shots are private pictures that are supposed to be between me and one other person, that’s definitely not my intention. Unfortunately, it’s the world we live in and I can own up to the fact that I’ve taken pictures like that and I’ve done it in the past. It’s unfortunate that it got shared so publicly and they’re now up literally, everywhere.

What’s next for Alex Minsky?

Well, the idea of a calendar has been thrown around for almost every month for the past eighteen months and I will gladly do it, so we will see. I do want to maybe act, do motivational speaking, I really want to do all of it. I like being active, I like working. I’m just glad that people are just finding motivation in what I’m saying.