An Edgewater Park, NJ, business owner took to Facebook to insult a local lesbian who decided to speak up against hate. Joianne Fraschilla expressed her disappointment that Whitebriar Bed & Breakfast was publicly supporting Chick-fil-A’s homophobia on the Camp Whitebriar Facebook page. Whitebriar co-owner Carole Moore responded venomously, stating that God invented AIDS to punish LGBTs, among other assorted insults.
What was supposed to be an uneventful drive turned into a media whirlwind for Joianne Fraschilla, her wife and her son. Fraschilla was driving by Whitebriar Bed & Breakfast when she saw that the business had placed a sign proclaiming its support for Chick-fil-A and marriage between one man and one woman. Fraschilla decided to express her disappointment with the messaging on the Whitebriar’s Facebook page. 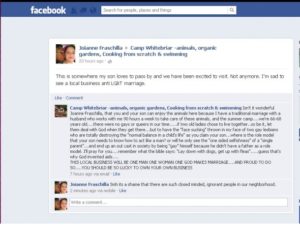 “This is somewhere my son loves to pass by and we have been excited to visit,” Fraschilla wrote on Camp Whitebriar’s Facebook wall. “Not anymore. I’m sad to see a local business anti LGBT marriage” [sic]. A few hours later, Fraschilla received a response. Writing for Whitebriar, Moore insulted Ms. Fraschilla, single-mothers, LGBTs and people with HIV/AIDS all in one go.

Fraschilla’s Facebook profile picture. “I don’t want her to feel the way I feel. It’s not fair. I just want her to understand that [what she said] was hurtful,” said Fraschilla.
Moore is a retired biology teacher who co-runs Whitebriar Bed & Breakfast with her husband of 47 years, Bill. She does not shy away from fighting for her beliefs. At least twice she ran against the very popular State Senator Diane Allen in the Republican primary and lost. Recently, Mrs. Moore started attending a Roman Catholic Church because she felt that clergy in Episcopal churches no longer spoke out enough against society’s moral ills. On Facebook, she wrote about how upset she was to “have the ‘face sucking’ thrown in my face of two gay lesbians who are totally destroying the ‘normal balance in a child’s life’…”

“[Fraschilla] sent me a picture of her and her lover,” Moore told Out In Jersey, “and they were making love!” The photograph in question was not sent to Moore, per se – it’s Fraschilla’s Facebook profile picture, showing her partner kissing her on the cheek. Later in the Facebook response, Moore quotes Poor Richard’s Almanack instead of the Bible, writing, “…remember what the bible says: ‘Lay down with dogs, get up with fleas’…..guess that’s why God invented aids….” [sic].

Fraschilla sent a screen-grab of her exchange with Moore to LGBT blogs and went on to create a Change.org petition demanding an apology from Whitebriar. The petition has since received almost 1,500 signatures in just a day and is creating an outcry from LGBT organizations. For her part, Moore says she was just expressing her opinion, an opinion that apparently sees HIV as God’s punishment for LGBT people.

GSE Founder and CEO Steven Goldstein said, “It’s not that more homophobia and transphobia occurs in New Jersey than elsewhere. It’s just that we at Garden State Equality don’t allow those who are homophobic and transphobic to get away with their hate, and we don’t think twice about bringing this hate to light.”

Screenshot of Moore’s Facebook Response.
Both GSE and Fraschilla hope that a peaceful apology will be the result of these damaging words. Goldstein said, “We always try to be fair and give perpetrators of hate a chance to do right. I’m especially cognizant of the need to do that as a leader in a community that tries to build bridges wherever we can. That said, if the owners of this bed and breakfast don’t agree to meet with us and don’t agree to meet with some of those who have been wounded by those words, of course they’re going to see protests and boycotts and more massive media coverage.”

Moore is not finished with her homophobic saga and is now alleging that her business was firebombed by LGBT activists. No one was hurt in the incident, Moore said, adding that the FBI is looking into the matter. Moore warned the many Change.org petition signers that they should be more careful about what they sign. The signers may be considered “part and parcel of inciting a terroristic threat” with their signatures, she said.

Moore was confident that she could handle any violence. “I’m a firearm instructor. I teach rifle, pistol and shotgun. I may be old, but I’m a dead-shot. I have no fears.”

An officer on duty with the Edgewater Park Police Department was unaware of any firebombing. In addition, no law enforcement vehicles or personnel were in evidence near the B&B on Tuesday night.

Bill and Carole Moore, co-owners of Whitebriar B&B. “…remember what the bible says: ‘Lay down with dogs, get up with fleas’…..guess that’s why God invented aids….” wrote Mrs. Moore.
The last thing Fraschilla wants is for Moore to feel under attack. Fraschilla said, “I don’t believe in protesting a small business. That could be scary for [Moore]. I would hate to be responsible for something that would be scary for her.” She continued, “I don’t want her to feel the way I feel. It’s not fair. I just want her to understand that [what she said] was hurtful.”

For her part, Moore is happy with the way things turned out. In the just three days, she says, her B&B has been booked through the third weekend of January. “I could not have paid for this much free advertising. … God works in mysterious ways.”

[UPDATE 08/01/2012 at 4pm] The Edgewater Park Police Department released the following statement to Out In Jersey: “There have not been any reports of a firebombing at the Whitebriar Bed & Breakfast with the Edgewater Park Police Department.  The police were contacted by Mrs. Moore on July 30, 2012 in reference to harassing telephone calls she was receiving due to a billboard that she has outside of the Bed & Breakfast supporting Chic-fil-a.  There were no complaints made in this incident and a report was generated as a matter of record.”

New York City Pride event will not be held in June