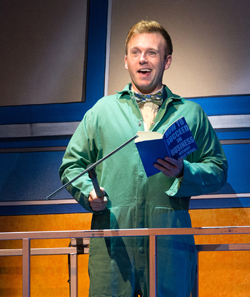 Supermodel girlfriends, rumored spats with Christina Aguilera and the engine that has kept Maroon 5 running for 10 years— there’s still so much more to Adam Levine. The adored frontman of one of the biggest pop bands, who recently told MTV that if he were president his first mission would be to legalize gay marriage, is also a straight ambassador for the gay community.

With so much going on—judging this fall’s third season of The Voice, making his acting debut on Ryan Murphy’s American Horror Story, and touring with Maroon 5—it’s no wonder the band’s latest album is called Overexposed.

In this chat with the pop star, Levine talks about how fighting for gay rights has little to do with having a gay brother, what he really thinks of people who don’t believe in marriage equality, and if we’ll see him, ahem, overexposed on American Horror Story.

Of all the things you could’ve said, why did you tell MTV that you’d legalize gay marriage first if you were president?

Adam Levine: It’s just so silly and it doesn’t make any sense to me that you wouldn’t be able to marry whomever you want to marry. It’s not our business. I don’t know why we’re obsessed with making everything in this country our business, all the time. It seems we’re a little behind on that, and we just need to make it legal and stop caring so much. It doesn’t matter. And it shouldn’t matter.

What would you say to other straight people who don’t agree with you on the marriage issue?

AL: Listen, I’m always willing to hear all sides of all arguments. Anyone who doesn’t agree with it is essentially putting themselves above other people. That’s what they’re doing. And that’s not okay with me.

People have their personal preferences as to what they want to do with their own lives, and they have every right to do that— just like a gay couple has every right to do that. It’s just not anyone’s business except the people involved. That’s all I would say: “What makes you better than these people?”

People have a million different justifications and reasons why they don’t want (gay marriage) allowed, but it doesn’t check out. Whenever I hear people’s reasoning behind it, I think to myself: First of all, marriage isn’t always successful anyway. Look at the divorce rate and all the things that go wrong with marriage. Whether it’s gay or straight, there are issues with it. Clearly people have a hard time staying together, and that’s just a sad truth about marriage in our society. People should be allowed to succeed and fail at marriage as they so desire.

Has having a gay brother influenced how outspoken you’ve become for the gay community?

AL: I don’t think that having a gay brother has affected the way I feel about it, because I would feel the same way regardless. I happen to have a gay brother, but that doesn’t mean I’m more of an advocate for equal human rights. That shouldn’t change anything about the way that I feel.

But he’s your brother, so certainly some of your passion for gay rights is an extension of that relationship, right?

AL: Of course! That contributes on some level to the way that I feel. But I don’t know… I don’t think I would feel any differently if he happened to be straight. The relationships that I have with people— whether it’s my brother or a friend, gay or straight— shouldn’t really ever come into play. Someone’s sexual preference is their sexual preference. Let’s move on.

When I’m talking about dating a girl and they’re talking about dating a guy— big fucking deal. That’s the thing; that’s what’s so bizarre about it: It doesn’t faze me. Obviously, I was brought up to believe that everybody is on a level playing field and we’re all crazy, cool and all that fun stuff, and I don’t pay much mind to it, because who am I to judge people? I judge people based on the things that they do. I judge people based on their character. If you have a friend who decides to do certain things in their own private time— even if they’re straight— whatever the fuck they’re into, fine. It doesn’t matter. That’s the biggest problem: It just simply doesn’t affect the way I view a person. It’s so arbitrary.

How big of a role do you think the gay community has had in Maroon 5’s success?

What’s been the best part of shooting American Horror Story so far?

AL: It’s so much fun. I’m having a blast and obviously Ryan (Murphy) is amazing and so passionate and so cool, and I thank him for giving me this opportunity. It’s a really special show to be a part of, and it’s been really fun and I’m very excited to see the results.

I’ve never really seen myself do any of this before, so I’m a little wigged out about that— actually watching myself. It’s all new and it’s all fun and it’s a fresh experience. I’ve gotten super into it and hope there are more cool things like that to come. And I’ve got a lot of blood on me!

Dylan McDermott is known for getting naked a lot on the show. Should we expect you to get naked as well?

AL: (Laughs) I don’t think I’ll be getting naked on the show. There’s no nudity for me. But you’ll see: It’s definitely interesting.

Who’s the bigger diva on The Voice: you or Christina Aguilera?

AL: Probably me. (Laughs) You know, it’s cool because at this point, we finally hit our stride as friends— all four of us. Anytime you get four people together who don’t know each other very well, at first certain people gravitate toward others and alliances are formed and friendships are formed. But what’s great now is that all four of us are very close and having the best time because we’re the most connected we’ve ever been.

Blake Shelton seems very connected to you. So connected, in fact, he has said that he wants to kiss you. Is there a bromance going on that you want to tell us about?

AL: (Laughs) I’m pretty sure all that is in good humor. I’m sure he doesn’t really want to kiss me. He’s married; he’s taken.

When was the moment that you felt like Maroon 5 had become overexposed?

AL: (Laughs) (The album title) is more just a humorous take on the fact that the band is everywhere, which is a wonderful thing. It’s kind of nice to put a spin on it and make fun of it and be silly about it rather than turn it into a bad thing. Because it’s amazing.

We’ve been lucky enough to withstand over a decade of, I guess, what you call relevance, and we’re really excited about that: continuing to have songs on the radio, playing big concerts and having this wonderful career. But we’re everywhere, so I do believe there is some truth to that statement—and it’s funny to poke a little bit of fun at it.

A lot has changed in the business since you started 10 years ago. We have Chely Wright, an out gay country artist, and now the first major out hip-hop artist: Frank Ocean. How do you think these people, and the music business as a whole, can be influential in changing people’s mind regarding gay politics?

AL: It’s a great platform for that. We’ve made a lot of strides in a lot of ways as far as acceptance is concerned. What’s funny is everyone is always talking about the world being so fucked and such a disaster, but when you really look at it, there’s an argument in there that the world’s become a better place.

Look at the strides. It’s really easy to look at all the things that are wrong with the world and say, “Oh my god, we’re all going to hell in a hand basket.” But I think what’s cool is to say, “Look at the wonderful things that we have been able to achieve and look at how much more equally people are treated now as opposed to the past.”

I think we have a lot of really big strides to make: For some reason, someone being homophobic is still somewhat acceptable in our society, which I don’t like. That’s what I hate so much, but I think that we’ve made strides there, too. It’s going to be a long battle. People make fun of people for being gay too much; it’s too culturally accepted still, but it’s better.

You used to watch a movie and people used to say— I won’t say it— but F-A-G all the time. And that doesn’t happen anymore. You have to look at that and say, “That’s a good thing, man.” It’s not this derogatory thing that’s widely acceptable. You look back to the ’70s and ’80s and you’re like, “Whoa, I can’t believe that’s in this movie or on this television show, or that it was casually thrown around a lot.” It’s become a bad word, and that’s a good thing. There’s always going to be a lot wrong with the world, but I do think it’s becoming a better place in that regard.

AL: That would be a nice idea. You do tend to find that a lot of people who are involved in music don’t care about whether someone is gay or not, or gay themselves. Who knows why that’s the case. Maybe that particular part of entertainment is evolving or has always been that way.

Most of the people that I know… it’s just not an issue. Most people in the music industry don’t necessarily judge people for that kind of thing and it doesn’t really come into play; it doesn’t matter. People, especially musicians and artists, were more guarded a while ago. Now it seems like it doesn’t seem to bother anybody very much, which is great.

Listen, the forward movement with this whole thing is good, and getting it all out there and having discussions and debates only helps us advance, so I’m all about discussing it with someone. I’m still very interested in getting to the bottom of why people don’t understand that in saying certain people aren’t allowed to marry… what leg do you have to stand on there? Unless you can admit that you’re putting yourself above them, then there’s no argument. Otherwise you would say, “Everyone has the right to marry.” That’s a hard pill to swallow because, like I said, I’m always ready to play the other side and to try to appreciate the other side for what it’s worth, and you can’t really argue unless you can start to understand where that side comes from. But I still don’t quite get it. It still baffles me.

Writer Chris Azzopardi is the editor of Q Syndicate, the international LGBT wire service. Reach him via his website at
http://www.chris-azzopardi.com/.

Supermodel girlfriends, rumored spats with Christina Aguilera and the engine that has kept Maroon 5 running for 10 years— there’s still so much more to Adam Levine. The adored frontman of one of the biggest pop bands, who recently told MTV that if he were president his first mission would be to legalize gay marriage, is also a straight ambassador for the gay community.

A tale of two governors

Deep Inside Hollywood: A new ‘Queer as Folk’ is coming to...