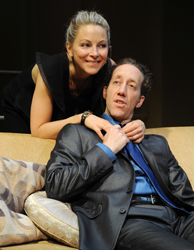 The focus of many LGBT groups is on some very public facet of the struggle for equality: LGBT youth, seniors, equal rights, marriage equality or HIV/AIDS to name a few. Jersey Shore Parents, Families and Friends of Lesbians and Gays prefers to work behind the scenes and has accomplished a stunning amount of local victories that way. The organization is growing— PFLAG has over 350 individual chapters since its founding 40 years ago.

Eloquent and charming, Abby Maisonave has served as President of the Jersey Shore PFLAG chapter for 2 years and was selected as the North Atlantic Regional Director for PFLAG in October, one of only 13 regional directors who represent over 200,000 members and supporters, according to PFLAG’s website. Besides helping her home chapter to grow, she is the liaison between the national office and local PFLAG groups. As you can imagine, it was difficult to fit an interview into a schedule packed to the brim with LGBT advocacy.

Maisonave joined PFLAG nearly a decade ago after someone close to her came out. “Initially, I became involved with PFLAG because of questions and issues that had come up and how to deal with those issues,” Maisonave said. “How do you tell family members, coworkers or friends, with the possibility of rejection or hatred expressed toward you or your child? How do you educate the prejudiced? The religious person? How do I become an advocate, a voice, an educator, a straight ally?”

JSPFLAG stays away from lobbying and sticks with the more local element of one on one interactions. “In addition to having three monthly support groups, two in Shrewsbury and one in Toms River, of which one is specifically for transgender individuals and their families, our chapter has become very involved with education and advocacy,” Maisonave said. The group speaks to undergraduate and graduate classes about LGBT issues and middle schools and high schools about bullying and Gay-Straight Alliances. “We co-sponsor educational LGBT programs with both Monmouth and Ocean County libraries and the Ocean County Human Relations Commission,” she added. “Our chapter hosts social outings [where] our members can socialize with each other without the structure of a support meeting, encouraging friendships and expanding their social circle of accepting peers and friends.”

“Initially, finding out a family member is gay stirs up many emotions and questions, and there is not always a person to turn to whom you think will understand and/or be supportive,” Maisonave said. PFLAG allowed Maisonave to “vent, ask direct, specific question, and feel comfortable in an environment in which [she] was not judged or criticized…” The understanding she gained was directly helpful with her work at JSPLAG. In schools, “you get these bullies and these tough kids,” she said. So, she asks them, “What if it was your sibling, and they’re gay, and you see someone doing something malicious to them? How would you feel?” Part of the effectiveness of PFLAG’s message is that understanding LGBT’s as your friends, family and neighbors helps to sweep away thoughts of otherness and discrimination.

As we move into further into the digital age, many LGBT organizations have had to evolve or risk their own demise. Maisonave clearly asserts, however, that PFLAG is not going anywhere. “PFLAG is the original family and ally organization… But, even with all of the positive changes that we see happening…the need for PFLAG is as strong as ever. As we work from the federal to the state to the local level to change anti-equality policies that hurt our families, it becomes even more crucial to work to change hearts and minds through support and education. Much like with the civil rights act in the 60s, the policy was put in place, but it didn’t put an end to racism at the person-to-person level. The same is true for LGBT people: we are putting the policy pieces in place to build a bridge to equality for all, but in order to get people to cross that bridge, hearts and minds must be changed.”

What’s next for Jersey Shore PFLAG? “I foresee our PFLAG chapter expanding more into our community, reaching out to organizations (religious and non-religious), schools, colleges and being present at LGBT venues,” Maisonave said. “There is a great need for straight allies, to help educate others, especially in faith-based communities. We are here to help… via our phone helpline, email, or in-person, either at a support meeting or a private meeting.”

In the end, JSPLAG serves a purpose that many other LGBT organizations strive to achieve: having normal people talk to normal people about LGBT rights. President Abby Maisonave said, “Overwhelmingly, PFLAGers are the best agents for change in their communities, because overwhelmingly people hear a message better when it comes to them from people they can personally relate to. And what mother can’t relate to another mother when she talks about her hopes and dreams for her kid? What father can’t relate to another father? Co-worker to co-worker, or faith community friends to other parishioners?”

Find more information about Jersey Shore PFLAG at: www.jerseyshorepflag.org.  Copntact their Helpline at: 908-814-2155.

The focus of many LGBT groups is on some very public facet of the struggle for equality: LGBT youth, seniors, equal rights, marriage equality or HIV/AIDS to name a few. Jersey Shore Parents, Families and Friends of Lesbians and Gays prefers to work behind the scenes and has accomplished a stunning amount of local victories that way. The organization is growing— PFLAG has over 350 individual chapters since its founding 40 years ago.