“Zero Feet Away” stars Max Jenkins, who has a part on Dead to Me as Christina Applegate’s gay real-estate partner; Brian Jordan Alvarez, who portrays Jack’s husband, Estefan, on Will & Grace, and Mozart in the Jungle star Peter Vack. In October, they talked about their longtime friendship, filming during a pandemic, and Funfetti.

Did you guys know each other beforehand? Had you crossed paths?

Brian Jordan Alvarez: Very much so.

Peter Vack: Max and I’s friendship goes back to childhood. We went to performing arts summer camp together, and then Brian and I met and became basically best friends in our freshman year of college.

Alvarez: When he met me, he told me, “You should meet my friend Max, you would like him,” and it turned out to be true. We’ve all become friends now.

Vack: I just want to underscore that these two are two of the people I love most in the world as friends. So often, the job with acting is to become very close and intimate with people immediately; with this, it really felt like a party from moment one. It really was like a summer camp vibe. I think that is in part due to the fact that they allowed friends and, in fact, sought out friends to do this or people that had these deep, decades-long connections.

Was the script set?

Alvarez: It was set. We had nothing to do with it. It was a totally wonderfully written piece that was just given to us. They were great about—sorry, am I bulldozing?

Alvarez: They were really generous, which always helps me in letting us improv. We also had a lot of freedom to just say the line slightly differently or improv. It was just cool to have that freedom. 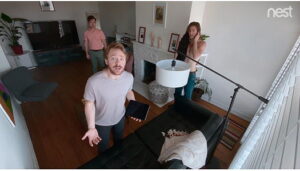 Max, did you improv the line “zhuzh my crack”?

Jenkins: I can’t believe they used that! You know, that was the moment that we really hit on something beautiful. I thought it was “zhuzh my taint.”

Alvarez: That might’ve been a different take.

Jenkins: Yeah. The director’s cut has “zhuzh my taint,” I believe. (Everyone laughs.)

Did you actually shoot on April 17, the day the episode says it took place?

Alvarez: No, no. I was gonna say it was funny that Peter called it summer camp because we were calling it that when we were doing it, but I don’t think we realized that it was also the dead middle of summer.

“we’re so lucky that we had this gift of breaking out of our quarantine, you know?”

Vack: I now have some handle on it because I’m back in New York, and it gets cold, but in L.A. with the coronavirus, it was all one month.

Jenkins: That’s why this experience was like, “before this and after this”; that was my only milestone.

Jenkins: And we’re so lucky that we had this gift of breaking out of our quarantine, you know? And also, I’m working now, and everybody is so scared on Special; everyone’s freaked out, and it’s like, girl, I ripped the Band-Aid off in July. We already did this, and it was a blast, and everybody is kind of more focused, so I feel very at ease working with all these stipulations and with all the PPE.

Peter, when you come over with a mask on in the episode, that’s now the reality for dating and hooking up. Did that speak to you on a personal level as much as it spoke to me?

Vack: Oh, totally. I have been both single and partnered in this experience, and, yeah, it totally felt like… it’s hard to even articulate. There’s new rules now, I guess. And I am something of a hypochondriac, so that was very easy to tap into.

“I tend to be single. I haven’t really attacked it consciously, like this new challenge of dating”

Jenkins: For me, I tend to be single. (Laughs.) I haven’t really attacked it consciously, like this new challenge of dating. It’s been more (like) if I’m truly obsessed with the idea of this person, I might hang out with them. There are so many more gates for my psyche to go through (laughs), and my psyche does not tend to clear those gates; therefore, there are few prospects.

So no virtual pandemic dating for you?

Jenkins: Well, I have been doing quite a bit of that, but it tends to be boring. There’s not so much going on in people’s lives; there’s not so much to catch each other up on. I find it just not… it’s a facsimile of getting to know someone. It’s like we’re all doing performances of being chill and being our normal selves. That’s just my experience.

Alvarez: Yeah, I was doing a lot more FaceTiming than ever.

Jenkins: I can’t get down. I just (don’t) feel like I’m really getting to know someone.

Alvarez: I guess I haven’t done any real formal dates, but I have FaceTimed with people, you know, in maybe a more romantic way. (Laughs.) And yeah, it’s definitely not as good as the real thing. (Laughs.) But yeah, I think after the lonesomeness set in after a while, FaceTime was really able to quell that in a way that just staring at my wall could not.

Jenkins: At first, I felt so sorry for myself. And I was like, “My friends who are partnered don’t understand, and they need to be checking in on me more!” Then I started to feel even worse for them than for myself, which I guess is what our episode is sort of about, a little bit: the challenge of that. Because I started to see, them jumping out of their skins. (Laughs.) I started to see my partnered friends freaking the fuck out.

Alvarez: I prefer the solitude to being bottled up with one other person.

Jenkins: Yeah. I’m already traumatized that I have to share my space with…. him. (He pans the camera to his dog, Rock.)

Jenkins: It was so normal, so oddly second nature.

Alvarez: It felt a lot like doing a play in the best ways. Because it’s very physical comedy, almost farcical.

Jenkins: It’s true. Typically the crew is not laughing at you, so you have this kind of unresponsive audience. But in our case, we were making ourselves laugh, so we didn’t give a fuck about anything but what each other was saying about it.

Vack: It just felt like effortless fun. And I agree: The fact that it was just us there, it was giddy. It was just pure pleasure, top to bottom.

How long did it take to shoot?

Jenkins: A week. We had a week of isolating in the hotel prior to shooting.

Did you use that time in the hotel to rehearse or just screw around?

Jenkins: We weren’t allowed to see each other.

Vack: We’d be, like, on the balcony, far apart.

Jenkins: With our masks.

I thought that they would’ve made you a pod and put you all in a hotel room together.

Jenkins: We agreed that the pod thing could’ve worked, but they were determined to divide and conquer us any possible way. It was like every precaution you could think of. There was no precaution too silly-seeming. (Laughs.) We had to gargle mouthwash before every kiss.

Is there anything about the episode you’d like to spotlight that happened behind the scenes?

Alvarez: We had like 30 jars of Funfetti. (Everyone laughs.) Because in filmmaking, if you’re going to do a lot of takes, you also have to have options.

Jenkins: And on the first take, I was just eating heaping spoonfuls, and my body started to shut down pretty quickly. I mean, talk about coronavirus.

This interview has been condensed and edited for clarity.

Trans actor and Sports Illustrated model Is changing the game

After “Younger,” Nico Tortorella is ready for the future of masculinity

The topic the Black Church dares not speak of honestly