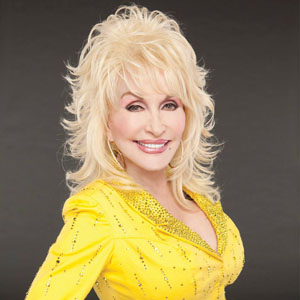 Dolly Parton is a natural born icon, and has continued to be a person who loves everyone without passing judgment. “It’s no one’s place to judge. God loves us all and people know that I’m open and accepting. When you get older, you really reflect and look back, you know?”

“I realize how fortunate I am about having my dreams come true because so many can’t say that. Many people are just as talented as I am,” she said. “And they may not have made it. Kris Kristofferson sang ‘Why Me Lord,’ and that’s what I think. That little girl that headed out of the Smoky Mountains that moved here in 1964, now here at 68 years old, I still feel like that little girl. I love the music, I love to write, and hope to do this until I keel over dead in about 30 years!”
Her music spans 42 studio albums, 5 live albums, and 180 compilation albums. The Queen of Country is not slowing down.

Her new album “Blue Smoke,” she says is her “best one yet.” It includes gospel, mountain, and two covers. She said, “I no longer worry about having an audience.” She knows her fans are going to show up.

“I am always amazed at how much fun performing is and how much I really do still enjoy it. I love my fans that have kept me in business all these years, paid all my bills. They feel like they know me and that’s just fun.”

Married to the love of her life, Carl Dean, for 48 years, she has had other loves, though platonic, such as with Kenny Rogers. Their friendship has lasted decades. She is still the most successful country singer, and has no plans of giving up that title any time soon. Although in the early years Dolly was recognized for her voluptuous figure and mile high blonde wigs, she has become much more.

Dolly grew up “dirt poor”” in a one room cabin on a run down farm in Locust Ridge, Tennessee, with her parents and 12 siblings. Through their influence, she found music in the Pentecostal church and, at the age of 13, she made her recording debut and appeared at the Grand Ole Opry.

While working on her latest album “Blue Smoke,” she says an a-ha moment came when she decided to do a song by New Jersey’s own Bon Jovi. With the help of Jon Bon Jovi and Richie Sambora, she turned “Lay Your Hands on Me” into a gospel song. “The album has more of a bluegrass-country flavor,” she said. “We used all the bluegrass instruments. One of the reasons I called it ‘Blue Smoke’ is that it has a tinge of the bluegrass of the Smoky Mountains, a mountain music flavor.”

“My songs are like my children. I hope to have ’em to support me when I’m old! They’re really like your kids, you love ’em all. Some, I love more than others. I really love the song “If I Had Wings.” I like the songs that I sang growing up. I love the little song ‘Miss You Miss Me” It came from a really personal place. So many people are divorcing, and the kids end up suffering the most. I enjoy the rewrite of ‘Lay Your Hands on Me’ by Bon Jovi and the Bob Dylan song, ‘Don’t Think Twice, It’s All Right’ It’s fun to experience new things.”

Her story behind the song “Banks of the Ohio” is “because all of my life I’ve been singing that song and it was a folk ballad. I just always liked it and it was such a man’s song about a guy who killed his girlfriend. I decided that I was going to write a part like I was a reporter or a writer, who would be seeing it from that point of view. It makes it easier for a woman to sing it.”

Dolly is a supporter of LGBT rights for many years. She believes same-sex couples should have the right to marry and “suffer just like the rest of us heterosexuals. I think everyone should be with who they love,” she said. When speaking about the LGBT community, she said, “I think they knew from the beginning that they’ve been held back, judgment has been passed. I love everybody. I look for the light in everyone and think that they should shine! It’s no one’s place to judge. God loves us all and people know that I’m open and accepting.”

Her advice to new artists is, “To thine own self be true. Know your talents, protect them, and fight for them. Today you can cover more things in 10 minutes than you could in 10 years. I try to surround myself with younger people who know that medium. I’m as old as yesterday, but I’m as new as tomorrow! I am thrilled to still be hangin’ in there.”

“People are always gonna be people. We are gonna have the same thoughts, heartaches, faith in love, family, things like that. I love life and kept a good attitude about it. I’ve always said I had more guts than talent, and I just love people and allowed people to know me. I think they think of me as an aunt or as a sister, and I get younger fans, because some of the younger fans have their parents listening to me. After all, I was Hannah Montana’s aunt! So I have a little younger audience now with that show.”

With not much down time these days, Dolly says when she gets the chance, she stays close to family. “I’ll babysit my nieces and nephews, my grand nieces and nephews. We get our golf carts, pack a picnic, and my husband and I head out in our RV. We go down on a riverbank. I really cook, I really just enjoy time with family.”

Dolly Parton on rhinestones and events to uplift your spirits

Pissi Myles attended the impeachment and almost broke the internet