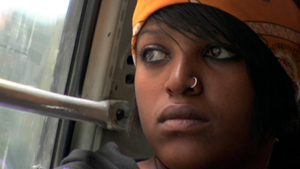 Two topics took center stage this summer at the International AIDS Conference in Washington, D.C.: the possibility of finding an AIDS cure within our reach, and with it, the beginning of an AIDS-free generation. Yet, while this optimism and hope can be understandable, especially in developed countries, the rest of the world is still struggling to survive AIDS, poverty, and famine.

The African country of Cameroon stands at the center of the AIDS story, with a population of twenty million people, of which 540,000 are HIV-positive. The collateral damage of the pandemic in Cameroon includes 330,000 AIDS orphans, children who have lost their parents to the pandemic.

In the book “I am That Child” Episcopal priest Elizabeth Geitz recounts her visit to Cameroon’s Good Shepard Orphanage with its founder.

“Nothing will change the fact that they are orphans,” Episcopal priest and author Elizabeth Geitz says, commenting on an AIDS cure and what would happen after an affordable cure is found. “[It] would certainly keep from being more orphans,” she adds, “and yet, as we all know, [an AIDS cure] is very difficult to get [and] I would guess quite expensive.”
Meanwhile, countries like Cameroon need our help with, among others, saving the AIDS orphans. While it may seem daunting, it is not an impossible task. Not if we use Elizabeth Geitz’s latest book, I Am That Child—Changing Hearts and Changing the World, as a guide.

I Am That Child started as a germ of an idea, and then grew into a book, as a direct response to Geitz’s visit to Cameroon and her time spent at the Good Shepherd Orphanage with its founder, the resilient and resourceful Sister Jane, and the children. Geitz, an Episcopal priest with experience working with grassroots organizations in Trenton, had met Sister Jane in New Jersey. The Good Shepherd Home founder was in the Garden State during one of her many visits to the States to raise funds, and she was staying with a group of Episcopal nuns. Then in 2006-2007, when Sister Jane was visiting again, it just happened that Geitz had a sabbatical coming and decided to take a trip to Cameroon. It turned out to be a trip of a lifetime.

“It’s a faith issue for someone like me,” Geitz explains her decision. “I felt drawn to it. I didn’t really know why, but I felt I was meant to go… so I went.” She went there to help and sponsored a child. She also went as a priest.

Geitz believes there’s no substitute for experience. And, while in Africa, she got a lot of experience. “I was really a student while I was there,” Geitz explains. “I was there to learn. I think it’s important for all of us from the West to realize that we are very much outsiders. If we go in and say ‘I’m gonna help and this is what you’re gonna do,’ it doesn’t work.”

She learned from Sister Jane, and also from the children, about the power of hope and the determination to never give up, no matter what. “These children have no self-pity,” she says. “They don’t view themselves as victims. They are alive with joy. [They] have a level of spirituality, belief in God and faith that overrides everything else. I’ve never experienced a deeper level of faith. There’s nothing like that in the U.S.”

She learned a lot from listening to children’s life-changing stories, and she recorded those stories because she wanted to hear them in the children’s own voices. Only when she returned to the States she could allow herself to digest it all, while spending two-and-a-half years researching the book.

The children’s stories are equally powerful, yet a few stand out, like Mobiya’s story— the nine-year-old who held his mother as she died of AIDS, and then had to ford a rushing river in the middle of the night to go tell his mother’s family. “I had no reference point for a nine-year-old holding their mother to them as she died,” Geitz remembers. But as a priest, she’s trained to keep her emotions at bay. She knows how to function in some of the most devastating situations. In this case, she let the children know she was there for them by listening to their stories and giving them hugs. And she channeled her feelings through journaling, recording her own thoughts, once she returned to her room.

With I Am That Child, the author answers her own question of how to make a difference beyond sponsoring a child or donating money. “My hope in writing this book was to take people along on that journey with me, so they experience these things as I experienced them,” Elizabeth Geitz answers. “My hope would be that people would connect with a certain section of the book and respond to that section.” For more ways to help, she encourages readers to check out the chapter called “Joining the Journey,” which provides information about working with UNICEF, supporting LGBT rights in Cameroon, or donating directly to the Good Shepherd Home using the information posted on their website.

I Am That Childis the first narrative story Geitz has ever written, offering educated answers to controversial topics like AIDS, religion, the criminalization of HIV and homosexuality and more. “My mission, when I got home, was to ask why there are so many orphans whose parents died of AIDS, what are the systemic issues that have exacerbated the AIDS pandemic in Africa,” she explains, “and take a look at those, because otherwise you are doing what I call band-aid ministry—you’re putting a band-aid over a deep gushing wound that’s not gonna do any good.”

Some of the systemic issues she noticed include male dominance of women; polygamy; criminalization of homosexuality and HIV in Africa, which deters people from getting tested for HIV out of fear that they can be identified as gay, branded as criminals and thrown in jail; and witchcraft.

Witchcraft was an eye-opener for the Episcopal priest. She explains that the witch doctor would put medicine in patients’ bodies by making cuts with a razorblade, and then use the same razorblade on many people. Talking about witchcraft, Geitz also mentions that forty percent of Cameroon’s population believes in ATR, or African Traditional Religion.
Talking with a priest about religion— ATR or any other kind—brings up the question about AIDS and the Bible. What does Geitz think about people who are still convinced that AIDS is a punishment from God?

“This is simply absurd,” the Episcopal priest says. “I don’t know what else to say about that. There’s no basis for that in the Scripture, except that back when the Bible was written, [people] would attribute things to God because they didn’t have scientific notion. The notion of God causing people to either get sick or well is not the understanding that the Episcopal Church has of God. God is not a giant puppeteer in the sky that says this person is gonna get sick and that person is gonna get well. There’s a strain all throughout the Bible that says God weeps when we weep; God suffers when we suffer. And that’s what God is. God is with the person who’s suffering. There’s a certain randomness to the universe that says some people will get sick and die, others will get well. Our loved ones will get sick or die. There are things that we don’t want to happen in our lives, but God is with us during our devastation.”

She adds that, “Unfortunately, the only people who get in the press are those who say God causes this [or that]… They lump all Christians under one label and it simply doesn’t apply to the majority of them. The majority of Christians do not believe that.”

The Episcopal priest further explains that some people do what is called proof texting of the Scripture, which means that they take one sentence out of the Bible and out of context, “hanging their hat on that,” like with passages known as clobber passages used against gay individuals or, by extend, related to AIDS.

“This kind of Biblical literalism or fundamentalism is what leads to the problem,” Geitz concludes. Leading Muslim, Jewish and Christian theological leaders, who attended a conference on September 11, 2002, as she did, share her view: that it’s easier for them to talk to one another than it is to talk to the fundamentalists in their own religions. This is because there is a growing divide between those who are fundamentalists in each religion and the majority of people in that religion.

Geitz points out the importance of having a dialog with one another, to allow people to see beyond the stereotypes when it comes to religion, sexual orientation, race or whatever else. Some individuals within major denominations are willing to have that dialog. The Presiding Bishop of Episcopal Church, who is a woman, is one of these individuals. She speaks out on a national stage but she— and others like her— have a huge tidal wave to overcome.

“We have a very long way to go,” Geitz says. “With all the books that I’ve written, I sorta see myself chipping away at a great big rock. [I’m] one person doing my part to chip away… and I think that a lot of people together can make a dent.”

With all the work that she’s been doing, with all that she has accomplished with that work, some people may call her a warrior. Yet Elizabeth Geitz doesn’t call herself that, because there’s too much warrior language related to God in the Old Testament. When I ask what she would call herself, she pauses for a moment. “I would say, I’m a truth teller,” she finally answers. “I’m a truth teller.”

Two topics took center stage this summer at the International AIDS Conference in Washington, D.C.: the possibility of finding an AIDS cure within our reach, and with it, the beginning of an AIDS-free generation. Yet, while this optimism and hope can be understandable, especially in developed countries, the rest of the world is still struggling to survive AIDS, poverty, and famine.

Barbara Kavovit talks “Real Housewives Of NY,” being in business and her new book