This is a sad day indeed. To see some of our worst enemies glowing with the pride of victory is a hard thing to suffer, after all our LGBT community has gone through to achieve equality. There on the stage with Donald Trump were two of the most dedicated homophobes in public life – Mike Pence and Mike Huckabee. Standing nearby was New Jersey Governor Chris Christie, who has certainly never done us any favors. 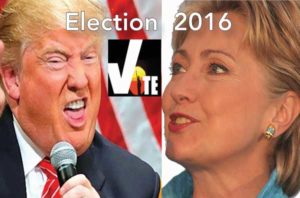 In center stage was Donald Trump, oozing as phony an attitude of graciousness in victory as his handlers could manage to train him for. The man who ran on a platform that specifically calls for the demolition of every gain the LGBT community has made, said he was going to be a president for all the people. Either we don’t count as part of “the people” or he’s junking the platform or he is lying yet again. Given his history, my guess is he’s lying.

Whatever Trump is doing or saying, one thing is certain; we are in for a long, hard road on which every battle we have ever fought may have to be fought all over again. Trump will appoint Supreme Court Justices that we will have to live with long after he is gone and who will be our worst nightmares.

That the people of this nation would choose a completely unqualified, utterly unscrupulous slime ball with a Russian porno model wife as President and First Lady, causes me to have grave doubts about our form of democracy. Those doubts are not assuaged by reflection on the reprehensibly stupid machinations of the Democratic National Committee that helped ensure Bernie Sanders would not get the nomination. Indeed, if blame for this catastrophe is to be laid at any doorstep, it would be the DNC’s most of all. Fate had given us a perfect candidate to oppose Trump. Bernie came with no baggage,a clean past combined with years of experience, a creative, immensely popular program and the enthusiastic support of legions of the same young people who put Barrack Obama in office twice. The DNC chose to throw all that away in favor of a tired old woman who was bent down under the weight of the baggage of scandal, distrust and avarice; a person who has about as much charisma as a phone pole. Her primary attraction was that she was not Donald Trump.

We thought we were out of the woods, but it turns out to have only been a clearing. We will now need our organizations and unified strength more than ever. Prepare for the enemy offensive, because even now it is gearing up. Lawyers for the Family Policy Council will be starting to prepare their case to overturn marriage equality as soon as they are done with breakfast, in anticipation of the first Trump appointee to the Supreme Court. Expect a court that will endorse every form of anti-gay discrimination. We are going to have to bake our own wedding cakes for quite a while.

If I was a young person, Canada might very well tempt me, but I’m too old to relocate and anyway, I’m not willing to give up so easily after all we have been through to get where we now are. We have fought a confident, entrenched power structure before and won. Let’s get ready to do it yet again.

Toby Grace is Out In Jersey Editor Emeritus.