I really don’t want to write about the cake case. The issue has already been beaten to death and there isn’t anything new to say about it. The opinions of the contending sides are now set in concrete and no amount of conversation will change them. For decades we have been fighting these piecemeal battles — one limited issue at a time and the overall success rate has been good. First it was same sex dancing in bars, and then it was sodomy laws, and so on and on. Now it is wedding cakes. 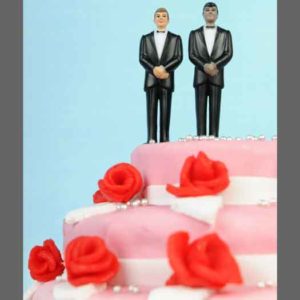 Are we going to have to keep on doing this forever? There are still states where, in this day and age, it is legal to fire someone because that person is LGBT. That’s hard to believe but true. What we need isn’t another cake case but a serious push for a “Dignity Amendment” to the constitution. Jennifer Finney Boylan, writing in the New York Times of June 4, 2018 suggests the text read “Equality of rights under the law shall not be abridged by the United States or by any state on account of sex, sexual orientation or gender identity.” Ms. Boylan attributes the idea to Sarah Kate Ellis, the president and chief executive of GLAAD.

Such an amendment is a good idea — a simple, elegant solution to a great many problems. It is also a very difficult objective. Amending the U.S. Constitution is a torturous, time consuming process that normally requires many years to accomplish. All we need do to get really discouraged is consider the heart-breaking record of efforts to get the Equal Rights amendment passed. Still, let’s take a long view. Jump back to — say — 1969, stand in a crowd of LGBT people and propose we fight for same-sex marriage. Having been there at that time, I can assure you the reaction would be “forget it! No way! We won’t get that far in a million years! That’s way too much to hope for.” And yet, here we are. We did it.

If we were able to overcome the entrenched fear, hatred and loathing directed at LGBT people by the vast majority of citizens back in those long-gone days when our movement was born and get to the point where gays can marry, serve in the military, be ordained as clergy in many denominations and much more, all in just my lifetime, we can do this.

We can get an amendment passed. We can at least try. It is what we need to do now — the final step in our long struggle with the law.

Toby Grace is Out In Jersey magazine Editor Emeritus