It was the election that would never end – until it did. Now that we know who our next president will be, let’s take some time to take care of ourselves. Let’s get back to real life.

Consider these eight things you need to do now that the voting booths have closed to stop the madness for at least another four years. 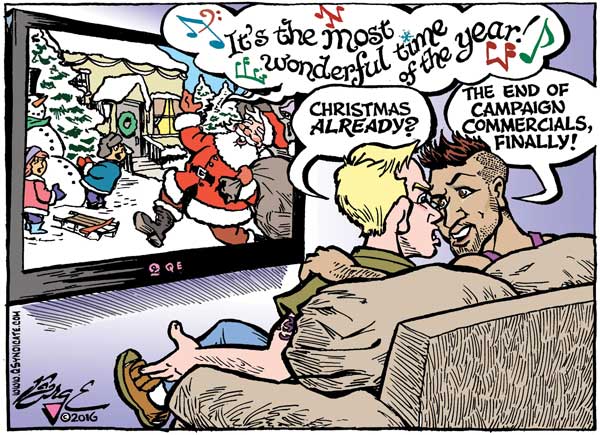 This election was exhausting. Exhaaaausting. You had heated debates with your family over it. You lost friends because of their inability to align their political views with your own. You blocked people on Facebook! I mean, I get it, all of this emotional turmoil has taken its toll on you. In fact, you’re probably eating your feelings right now as you read this article. So, I’m gonna do you a solid: Put away the ice cream, homeboy; don’t even think about that extra slice of pizza. Take your ass to bed right now. A long nap is in order to clear your head of what’s happened over the past 18 months, and you deserve it. (No matter what the Republicans say about your lazy ass.)

2. Wake Up and Assess the Situation

OK. So we’re here. We have a new president – perhaps the one we wanted, perhaps the one we said would make us move to Canada if he were elected. Either way, it’s a fresh start for America, for better or worse. Take it in, think about it, contemplate what this presidency means to you personally. Then pour yourself a shot. You’re gonna need it.

3. Concede, and Be Kind to One Another

Listen, if your candidate didn’t win, don’t call ‘rigged.’ You’ll look like an idiot to every intelligent person you know. Instead, accept the Electoral College’s decision on who should be the leader of the free world and absolve yourself of all responsibility. Your outcry won’t change a thing, and nobody likes a sore loser. Which is especially important if you’re trying to get laid in the aftermath.

4. Try to Repair the Broken Relationships

You’ve unfriended people for being insane on social media during this election season, and you’ve likely been unfriended by others because you went a little too far in your own political posts. Now that it’s over, however, it’s time to make amends. Reach out to your great aunt and tell her that you still love her even though she’s a proper idiot for supporting Trump. Say you’re sorry to your estranged grandma even though she voted to take your rights away. At the end of the day, what’s done is done, and all you need to concern yourself with right now is that they’re both gonna die waaaay before you do.

6. Take a Break From Social Media

Social media is precisely the reason you’re on a regimen of three Xanax a day. Now that pure evil has taken office shut that shit down. Take a week off. Nobody will miss your half-eaten burrito pics or how you’re totally protesting the destruction of native land as a result of the Dakota Access Pipeline, despite that you’re definitely not gonna get off your ass to do anything worthwhile to prevent it.

7. Start To remember how you don’t matter

Sure, your vote “matters,” but do you? Not to any politician in office. It’s best to remember that when the revolution is upon us.

For the past year and a half, we’ve all been thinking short term—who will be our next president? Now that it’s decided, you need to refocus on the long term, like how we’re going to afford gas and food and mortgages in the future, and what you’re going to do when America does itself in. Because that’s coming, ya know. Stay woke, friends, or we won’t make it. Just ask Greece.