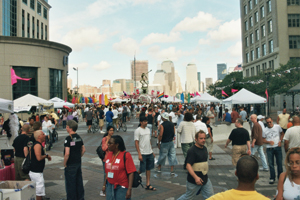 A new report on LGBT equality in America’s cities was just released and New Jersey did well. But Jersey City was the only perfect score in the state at 100 points. Asbury Park scored 59 points, Lambertville scored 76 points, New Brunswick scored 77 points, Newark scored 76 points, Ocean Grove scored 77 points, Paterson scored 60 points, and Trenton scored 57 points. The average score for cities in New Jersey is 70 out of 100 points, which falls well above the national average.

The report by the Human Rights Campaign, the nation’s largest LGBT civil rights organization, rated 291 cities and municipalities across the nation, including the eight cities in New Jersey. The 2013 Municipal Equality Index (MEI) is the second edition of the rating system of LGBT inclusion in municipal law. This year’s index finds that cities across the country and in New Jersey, continued to prove that municipalities support equality for LGBT people. This is even so in states where they have failed to protect LGBTs.

Key findings from the study include the 50 state capitals, the 150 most populous cities in the country, the three largest cities in every state, the city home to each state’s largest public university, and the 25 large, 25 mid-size, and 25 small municipalities with the highest proportion of same- sex couples nationwide. Twenty- five cities earned a perfect 100-point score and serve as shining examples of LGBT inclusivity, with excellent policies ranging from non- discrimination laws, equal employee benefits, and cutting- edge city services. Jersey City, New Jersey earned a 100-point score.

Cities across the country achieved excellent scores, demonstrating that cities have a commitment to LGBT equality that is unbridled by regionalism and not confined to parts of the country many people assume are most LGBT friendly; 25 out of 291 cities received perfect scores (100 points) in 2013; only 11 did in 2012. Of the cities that scored 100, 8 cities came from states without comprehensive relationship recognition and without statewide non- discrimination laws (compared to two such cities in 2012); 31 million people live in cities that cover trans people at the city level alone.

“Equality isn’t just for the coasts anymore,” said HRC President Chad Griffin. “This groundbreaking report shows that cities and towns across the country, from Vicco, Kentucky to Coeur d’Alene, Idaho, are leading the charge for basic fairness for LGBT people.”

“Change is possible everywhere, and the Municipal Equality Index showcases the monumental progress we’ve made. In cities and towns across America, advocates are telling their stories, organizing their friends, and changing the hearts and minds of our policymakers and neighbors,” said Rebecca Isaacs, executive director of Equality Federation. “We’re winning equality where it matters most – in the communities we call home.”

The MEI rates cities based on 47 criteria falling under six broad categories:

Non- discrimination laws; Relationship recognition; Municipality’s employment and contracting policies; Inclusiveness of city services; Law enforcement; and Municipal leadership on matters of equality. The MEI was issued in partnership with the Equality Federation Institute. The full report, including detailed scorecards for every city and a searchable database, is available online at www.hrc.org/mei.

U.S. Senate held a cloture vote for the Respect for Marriage Act

2022 has seen at least 32 transgender and gender non-conforming people violently killed in U.S.