One of the best parts of my job as an LGBT lifestyle expert is discovering all the dynamic new people, places, and things expected to interest the LGBT community. Some do, some don’t — I sift through A LOT of duds, in fact (like the travel-size cold-sore medicine one PR hack pitched me for years because he thought it would make a great stocking stuffer at Christmastime) — but every once in a while, I stumble upon a few gems to tell you about it. As such, here’s what I’m into right now — and you might be, too.

After years of false starts and delayed gentrification, Asbury Park, New Jersey is now a full-fledged LGBT destination for gay men, and lesbians alike. There’s no shortage of “fam”-friendly places to stay (you won’t be disappointed with a night at the celebrated Asbury Hotel), dine (upscale Mexi-joint Barrio Costero has margies to die for), and get your swerve on (the pool at Paradise is always poppin’ after midnight on Saturdays during the summer). But if you really want to throw your weekend getaway into overdrive, swoop into town for Ascension, Aug. 4 to 6, featuring 11 high-octane events, including tea dances, beach bashes and glow parties taken to new heights by 14 DJs and thousands of prospective half-night stands. Check it out at ascensionparty.com.

You have to tip your feathered caps to Netflix, Hulu, and other popular streaming services for providing (for the most part) satisfying LGBT programming options, like trans creator Jill Soloway’s award-winning Transparent over at Amazon. But now you can effectively eliminate all the hetero noise clogging up your queues and go full “queerated content” thanks to REVRY, the first dedicated LGBTQ+ digital streaming platform. Available on Apple TV, Chromecast, Roku, plus iOS and Android devices (with Pluto.tv and Amazon Fire capabilities coming soon), REVRY, which recently celebrated its first anniversary, features original content like 3030, a series about platonic black lesbian roommates living in Las Vegas; the newly added Bob the Drag Queen comedy special, Suspiciously Large Woman; as well as international shows and movies, like the subtitled Free Fall, characterized as the German Brokeback Mountain. Spoiler alert: They bang in the woods using nature’s lube. 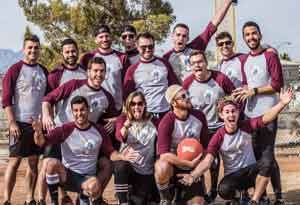 When I lived in Manhattan I was a regular on the social sports scene—both “straight” and gay leagues — playing a wide range of activities, including bowling, kickball, dodge ball, trivia and corn hole (and yaaas, competitive corn hole is totally considered a sport, queen). When I left NYC for life in a small beach community on the Jersey Shore, however, being part of these teams was among the things I missed most. That could all change soon, though, as I was recently introduced to Varsity Gay League, which is celebrating its milestone 10th anniversary this year. VGL is the largest sports league in California with more than 8,000 members, and it has outposts in San Diego, San Francisco, Long Beach, Sacramento, Austin, Orlando, and Portland, with plans to add other major cities to meet demand. I’m currently in talks with the league’s founder Will Hackner to bring VGL to my part of the world, and if you think your city might benefit from this organized homo-raderie, hit ’em up on Twitter @vglsocal.

4. OUTshine on the Sea

Earlier this year I attended the 10-day OUTshine LGBT film festival in Miami, which featured some of the best LGBT films I have ever seen (not an exaggeration; find French-Canadian film 1:54 and have a box of Kleenex handy). I’m pretty pumped for OUTshine on the Sea, the fest’s seven-night Eastern Caribbean Cruise (hitting Nassau, Punta Cana and St. Thomas), from February 17 to 23, 2018, aboard Celebrity Equinox. If you’re a film and cruise lover — two of my favorite things! — Pack your movie-marathon sweatpants and let’s gain 10 pounds of popcorn weight on the open ocean together.

If you’re fed up with all the blatant racism on your gay dating/hookup apps, take a break and zip into Hornet, a gay social-networking app oddly popular in France, Russia, Brazil, Turkey, and Taiwan (you want to expand your horizons, right?), but whose user base is consistently growing here at home. Aside from finding likeminded men nearby (the app includes a GPS component just like Gindr and the gang), you can tap into and share LGBT-focused new stories on its companion website UnicornBooty.com; discover local queer hotspots around your home and when you’re traveling; and keep your social calendar lit with curated homocentric events.

My boyfriend and I are adventurous, especially when it comes to our bodies and bedroom activity, and we had an arousing at home date night with Haus of Betch s hand-crocheted jock straps — it was like Captain America himself was calling me hither in his blue three-starred weiner basket (sorry, no photos) — and an arts-and-crafts project making vibrating dildos of our own dicks with kits from Clone-A-Willy. The latter was a bit stressful because the process moved ultra-fast — we had to get and stay hard while mixing the plaster at an exact 90 degrees, and cast our cocks in under three minutes! — but we shared laughs along the way, amazing sex afterward, and now we’ve got life-size replicas of our own wieners that we’ll probably just use to go fuck ourselves whenever we have a tiff. (Sorry; still no photos.)