Forget the traditional New Year’s resolutions that you probably didn’t keep (I know how hard it is to stick to an everyday gym routine when it’s arctic degrees outside) with something more meaningful — like committing to ways to be a better queer. Here’s a short list to get you started.

1. Give more of your time to local LGBT organizations

Most communities have an LGBT support center, but you might not know it if you’re not seeking LGBT support. Still, it’s there, and it may need your support. In 2018, make it a point to pop in to offer your assistance. Maybe you can volunteer your time for an upcoming event or activity (I had a fun evening at drag bingo hosted by my local center recently). Or you might mentor LGBT youth who desperately need responsible, caring adults in their lives. Or maybe offer financial support to keep the center’s valuable programs on track. For many of these organizations, just opening the doors on a daily basis is a struggle, and they will appreciate every hour and dollar donated by community members like you.

I’ve attended several LGBT film festivals over the years — including my current home of Asbury Park, N.J.; and most recently the OUTshine Film Festival (which is really top-notch, by the way), both in Miami and Fort Lauderdale, Florida — and these programs are the only place you’ll find a conscientious slate of curated films that represent the entire LGBT community in one mega-celebration of diversity filmmaking. If your home city doesn’t offer a film festival, maybe it’s time you and your group of go-getters put the wheels in motion to establish one. Otherwise, travel to the LGBT film festival near you, or plan a vacay around this affair, so we can all continue to push LGBT movies into mainstream consciousness. Hollywood will take notice of our full breadth of films eventually, like it has in the past 18 months with Moonlight; Call Me By Your Name; and 20th Century Fox’s groundbreaking gay-teen romance Love, Simo, in theaters nationwide on March 15 (which is a big frickin’ deal, if you don’t already know). 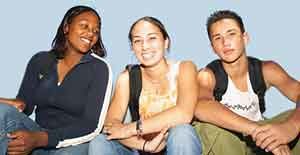 3. Serve as a mentor for LGBT youth

It may seem like the world is a more accepting place than ever for LGBT youth, but there are still kids out there who struggle not only with their sexual orientation and identity but also with friends, family, teachers and authority figures that refuse to accept them as they are — and that’s where you come in. If you’re a successful person, contact your local school district to find out how you can speak at Gay-Straight Alliance meetings to let these youth who may be having a hard time know that it does, in fact, get better. Moreover, programs like Live Out Loud’s Homecoming Project helps connect high school alumni to their alma maters, making it easier for you to reach out and inspire. You’ll make a bigger difference than you realize, I promise.

I’m not recommending you stop spending your money at hetero-owned business — though I’m sure there’s a faction of us out there who would recommend that — but rather take some time to research your local retailers and restaurants to see who’s family. Many times you can glean this information by word of mouth or just a little digging on social media or in this publication. When we support each other personally and professionally, our communities are stronger. Just look at what we did to San Francisco, New York, and L.A. and Miami…

5. Stand up for yourself and your sexual orientation

Don’t let people put you down, and don’t let anyone make you hide in the closet — period. Actress Marsha Warfield recently relayed an anecdote about how she’s been out privately forever, but her mother didn’t want her to come out publicly because she’d be embarrassed by it. Whitney Houston dealt with the same issue, as do countless other ordinary people. Fuck that!

OK. This is your life, you get one shot at it, and if anyone is embarrassed by who you are, you should feel confident enough in yourself to tell that sad, angry person that you will only be better without them. You don’t need that shit. Because it’s 2018, honey. Fucking LIVE!