Grand diva RuPaul recently weighed in on the persistent issue of how we’re supposed to feel about bachelorette parties in gay bars, with at least one Huffington Post writer describing it as the “definitive word” on the topic in social media. 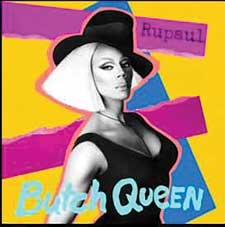 “Check yourself before you wreck yourself,” Ru said on the podcast Dinner Down Party. “You know, this is an important thing: People who live in the mainstream and the status quo think that everyone else is there to serve them.” I’ve never gotten that impression from straight people, or women specifically, but OK. Also, who made RuPaul our spokesperson?

Nevertheless, the debate on whether chicks wearing dicks (because bachelorette parties love some plastic penis) are welcome in our bars goes back to at least early 2009 when the Chicago Tribune published an article on how the gay rights battle — specifically marriage equality — put a strain on the celebrations. The issue reached peak shade in 2012 when popular Los Angeles watering hole and grind spot The Abbey was the first to implement an all-out ban on the fem festivities. At the time, it was a political statement to suggest that if gay people can’t get married, we don”t want you flaunting your right to wed in our sanctuary. Fair enough — but that battle is won. So why, even now, are we still shutting out our straight allies? — it’s  not right, and here’s why.

For decades the LGBT community has protested, marched and lobbied for legislation against our discrimination, yet we’re quick to turn around and apply limitations to other groups with which we take issue. Before we received full marriage rights, the basis for anti-bachelorette rhetoric was logical — if we can’t get married, don’t rub your impending nuptials in our faces; that stance had merit at least.

Now, however, the case against the hostile takeover of our bars, as some describe it, is about how disruptive these groups are. They’re wild and out of control and they treat us like some sort of sideshow — so say the torch-wielders. I’ve never experienced the latter (and you probably need to lighten up or grow a pair if you’ve ever felt this way), and all I can think when I hear that summation is: You mean they got drunk at a bar where they knew they’d have fun, but because they’re  not hot guys with take-home potential, they’re  a distraction and you don’t  want them here? Well, when you put it that way…

While the ban on bachelorette parties was once a political statement meant to bring attention to the very real issue of why same-sex couples weren’t permitted to marry one another in most of the United States, it now exists as a misogynistic attempt to shun straight culture. Think I’m off base? Consider the same scenario but with the opposite sex. If a group of straight guys came into the gay bar for a bachelor party, the joint would be all over it lickety-split. Which makes the real problem then not the celebration of hetero marriage with bachelorette parties in our bars but rather the reduction of floor space for available dick on a fuck night (because we all know if it was a stag party, your new life goal would be to get that best man in your bed).

Instead of calling it a ban on bachelorette parties (which reeks of prejudice), the directive should prohibit party paraphernalia like cakes, wands, balloons and other large objects. The compromise will require bachelorette parties to tone it down a bit, or they’ll go somewhere that doesn’t apply those restrictions. At least then the issue will be about what patrons are bringing to the bar and not the type of customer we’re willing to let in.

3. Some Gay People in Gay Bars Are Just as Disruptive

Bachelorette parties are loud, obnoxious and rude, according to the haters. Meanwhile, I’m  over here like, have you ever met a bent-up queen? Gay people are some of the most obnoxious drunks I’ve ever encountered — myself included. Another clapback is that bachelorette parties should have more respect for the establishment and its patrons. That’s interesting, too, because I’ve never had a woman in a gay bar grab my crotch without asking or tell me how hard they want to fuck my boy pussy when I didn’t give any indication that that was an option. Furthermore, I’ve never had a bachelorette or her party snap in my face in a Z-formation, try to “read” me (which is a mistake for anybody), or undermine my partnered status right in front of my face — all reasons I’ve had to put disrespectful gay men in their place at the homo club. The point is, assholes are assholes, regardless of their gender or what they’re celebrating, and they should be dealt with equitably.

4. It’s Offensive to the LGBT Community That Embraces Straight Allies

I can’t say that I’m truly offended by this issue — who has time for that these days? — but I do recognize that there is a portion of our community who views the suggested ban on bachelorette parties as detrimental to the relationship between our straight allies. What message is it sending when we’re demanding on Capitol Hill to be treated the same as everyone else then going back home and telling certain types of people they’re not welcome where we are. That mentality was born on the whims of elitist gay men (and that’s who’s propagating this issue today, by the way), and it goes against everything we’ve fought for. Straight women have long been our allies and partners in crime — they’re our best friends and we’re their best friends — so why are we deciding how they should celebrate a special occasion in their life and telling them how to act while they’ doing it? Live and let live.

Mikey Rox is an award-winning journalist and LGBT lifestyle expert whose work has been published in more than 100 publications. He splits his time between homes in New York City and Asbury Park with his dog Jaxon. Connect with Mikey on Twitter @mikeyrox.