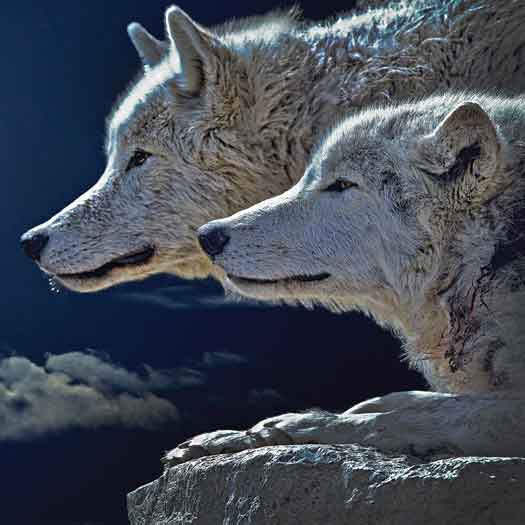 David Brooks calls 2019 “the Year of the Wolves,” in a January 2 opinion piece in the New York Times, anticipating that we are in for unrestrained political blood-letting, devoid of moral compass, and aimed solely at wining at all costs by the utter destruction of opposition. The knives are well and truly out, and Mr. Brooks did not need a crystal ball to make this prediction.

The nation has not been so intransigently divided since the Vietnam Era. Somewhere between 60% and 70% of the citizens loath Donald Trump and his supporters and will not credit them with the slightest virtue or accomplishment. The remaining 30% to 40% are evidently willing to support Trump and the Republican party with no regard whatever for morality, law, tradition or even common sense. This bitter conflict permeates every aspect of public life down to such transient issues as the color of White house Christmas trees. And it occupies the major media to the near exclusion of all else. To employ a well-worn metaphor which nevertheless was never more applicable than now, we are re-arranging the deck chairs on the Titanic.

There are in fact two very serious issues facing us today, and Donald Trump is merely a symptom of one of them. One of those issues is climate change. Barring an epiphany on the part of the nation’s leadership – which seems unlikely — we are entering a period of exponentially expanding disaster that, within a single lifetime, will quite literally end civilization as we know it. Middle class America is now living in the golden after-glow of a post -World War II society of unrestrained consumerism — a world in which there is meat on the table for three meals a day, and oranges in the market year-round — a world in which everyone has the latest tech gadgets, and in which home and car ownership is the norm. That world has perished. It just hasn’t had the sense to lie down in its coffin as yet. The tidal wave of refugees from the “third world” already beating at the gates of more fortunate nations is only the beginning of what is to come. As climate disaster increasingly causes economic collapse and political instability, that tidal wave will either overwhelm less affected nations, or force them to take defensive measures that can only be horrifying – an abandonment of any pretense of the traditional, mainstream values of Western civilization. Survival knows no virtue.

The second major problem is the rise of Christian nationalism, a right wing phenomenon that is often misunderstood by those not a part of it. It is the antithesis of constitutional democracy. It advocates a theocracy supported by a re-written constitution, and a re-structured government conducted by “born again” fundamentalists. Do not make the grave error of dismissing these people as a lunatic fringe. Loons they may be, but they are certainly not fringe. Vice President Pence is one of them. The annual prayer breakfast that draws so many of the beltway insiders in Washington is put on by “The Family,” a secretive organization of Christian nationalists. Members of Congress are among them, as are a number of CEOs of major corporations. They are close to the levers of power. They have infiltrated our armed forces – especially the Air Force whose service academy is known as a hotbed of evangelical Christianity. They specifically reject the idea of separation of church and state, as well as the equality of all citizens before the law.

Trump is indeed a symptom of this second problem. Many observers have scratched their heads in wonder at the dedicated, unreasoning support Trump is given by the Christian fundamentalists. By no possible evaluation is Trump a Christian, or even possessed of normal morality. To the best of my knowledge he hasn’t personally killed anyone. But he certainly breaks every other commandment on a daily basis — especially the one about bearing false witness. How then can these hyper-religious people support him? For an answer, go to The Bible and read about King Cyrus who, though not himself a believer, was led by God to liberate the Jewish captives. Trump is seen as such a figure — a tool in the hands of God to put conservatives on the Supreme Court, combat abortion, reinforce white privilege, and perhaps roll back LGBT rights. His personal failings are irrelevant to this holy mission, and since this is God’s work, opposing Trump, the Lord’s chosen vessel, is blasphemy. “It is God that rises up a king,” according to Paula White, a prosperity gospel preacher who has advised Trump. We know Trump was chosen by God for the simple reason that he is in fact president. God raised him up when no one thought it possible. That at least is the circular logic of the Christian right.

In a larger sense Trump matters little. It is unlikely that orderly constitutional democracy will survive the catastrophic environmental changes that science tells us with absolute certainty will soon be upon us. That is the problem with science as opposed to politics; science is made up of facts. Facts are nasty, uncooperative little creatures that refuse to accommodate themselves to either political or religious dogma, whereas preachers and politicians can spin worlds of fantasy without restraint.

The facts are grim. I think I’ll pick a good fantasy and open a bottle of champagne. Happy New Year.

Toby Grace is Editor Emeritus of Out In Jersey magazine.